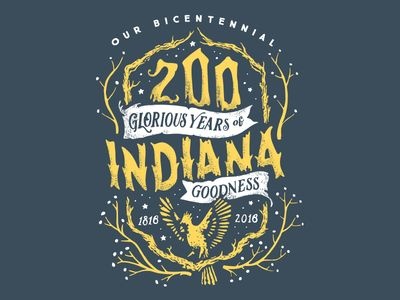 Here’s some interesting “stuff” and important dates about the great Hoosier State for the rest of the year.  Enjoy!

The name of our state means “land of Indians” and the name was originally given to the territory when Indiana was created from the Northwest Territory in 1800.

In 1800 the Indiana Territory was established from Northwest Territory with William Henry Harrison as our first Governor.  Vincennes was our first capitol.  Three years later the Indians in the territory signed treaties to give over their land to the new Indiana Territory.  But it was on December 11, 1811, after both the Michigan and Illinois Territories separated from Indiana that our Indiana Territorial General Assembly petitioned Congress for statehood. Unfortunately this petition was denied but Congress said that when we reached a population of 35,000, they would allow Indiana to be a state.

While still not a state, on March 11, 1813, the General Assembly decided that the capital should be moved from Vincennes to Corydon.

Did you know that actors Leon Ames, Anne Baxter, Hoagy Carmichael, Larry Bird and designer Bill Blass are all our fellow Hoosiers?

On August 5, 1816 Indiana held its first statewide elections, with Jonathan Jennings being elected as the first Governor of Indiana.

On November 4, 1816  Indiana held its first General Assembly under the 1816 and on November 7, Governor Jennings’ inauguration was held.

On December 11, 1816 – President Madison approves Indiana’s bid for statehood as Indiana becomes the 19th state in the country.

Your fellow Hoosiers…..David Letterman was not only born in Indiana but is a graduate of Ball State in Muncie.  While we usually associate Abraham Lincoln with Illinois (The Land of Lincoln) remember that he actually spent most of his childhood from 18916 to 1830 here in Indiana.

Your Fellow Actors . . . Indiana has also been home to such actors as Marjorie Main, Joyce DeWitt, Steve McQueen and Vivica A. Fox as well as writers Booth Tarkington, Kurt Vonnegut, and James Whitcomb Riley.

WHY are we called Hoosiers?

While everyone knows that Indiana people are called Hoosiers, nobody seems to quite know where the term Hoosier started. Historical scholars find Indiana’s folks being referred to as Hoosiers as early as 1831. They found the term in a letter where a G.L. Murdock wrote that he wanted to name his boat the Indiana Hoosier. In another letter from 1835, Sarah Harvey, a Quaker from Richmond, wrote her relatives saying, “old settlers in Indiana are called ‘Hooshers’ and the cabins they first live in ‘Hoosher nests’ . . .” She may have picked up the phrase from poet John Finley’s very popular work “The Hoosier’s Nest.” The poem is really lengthy and sings the praises of “the land of the west.”

I’m told, in riding somewhere West,
A stranger found a Hoosier’s Nest,
In other words, a buckeye cabin.

Finley went on to become the mayor or Richmond, Indiana.

Though we don’t know how the name came into being, we do know that much of the lore behind the term “Hoosier” is just lore. We didn’t get the name because when people knocked on cabins doors, Indiana residents would ask “Who’s there.” One would assume that in every other state of the union that people would probably ask that same question when someone knocked on their cabin doors…and they’re not known as Hoosiers. Some have said it’s because the river men of Indiana were always getting into brawls and had the ability to “hush” their opponents….so these men became “hushers” which then became “hoosiers.” That’s not even a good story as stories go.

Now my favorite story about why we’re called Hoosiers is based on the words sounding like “Whose Ear .” Again, it seems that the early settlers of Indiana loved to get in fights and during one such fight, one of the brawlers bit the ear off of another man. Supposedly the next day a settler came into the bar and saw the appendage lying on the floor and asked “Whose ear?”

So between letter writers, poets, cabin dwellers, and scrapping pioneers, the history of the word Hoosiers lives on. None of the reasons are true but at least the stories are colorful.