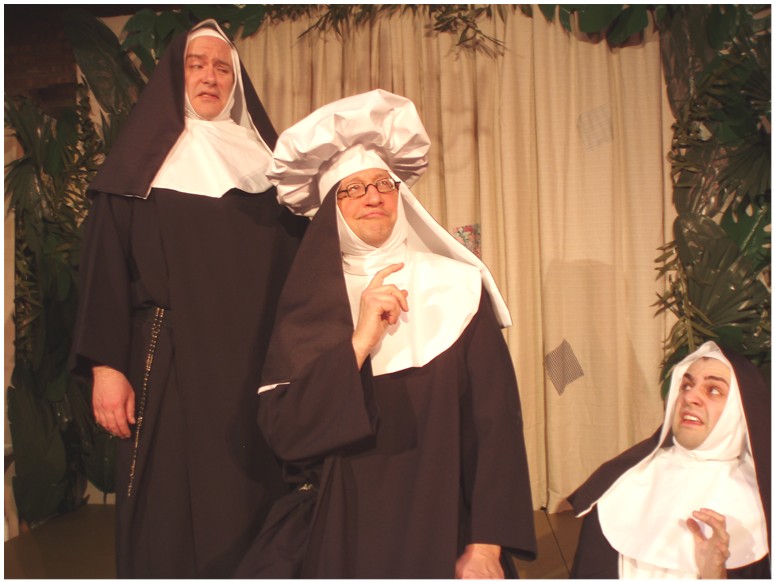 You’ll be laughing at the Towle’s “Nunsense A-Men”

**** Highly Recommended ***** The Little Sisters of Hoboken are back – with a twist.  In the Towle Theater’s production of “Nunsense A-Men”, the sisters are men and they’re hilarious.  The fun starts with an inspiring song-and-dance number, “Nunsense is Habit Forming.”  I laughed until my cheeks hurt.  4 Spotlights.

The story is the same, the sisters have a teeny-tiny situation.  The convent’s cook, Sister Julia, Child of God (always said while crossing self), poisoned 52 of the sisters with her vichyssoise.  According to Sister Mary Hubert, (John Buranosky), they had enough money to bury 48 of the sisters but Reverend Mother Sister Mary Regina (Allen Horner) had to buy a flat-screen TV for the convent.

With the last four sisters stored in the convent freezer, the sisters desperately need to raise money, so they’ve taken over the stage (already set up for the eighth grade’s  production of “South Pacific”) for a fund-raiser.

In addition to Reverend Mother, Sister Mary Regina, a former circus performer; and her second-in-command/Novice Mistress, Sister Mary Hubert, the performers include Sister Robert Anne (Tom Farley), the convent’s streetwise driver from Brooklyn, Regina’s choice for understudy; Sister Mary Leo (Colin Funk), a not-so-graceful novice who is sure she can become the world’s only ballerina/nun; and Sister Amnesia (Kevin Bellamy), who can’t remember a thing, much less her name, after a cross fell on her head.

You’ll hear about the individual foibles of many of the sisters.  You’ll meet Sister Marionette in a musical number with Sister Amnesia.  You’ll laugh at clever puns and funny songs.  In fact, the antics of these so-called nuns will keep you laughing.