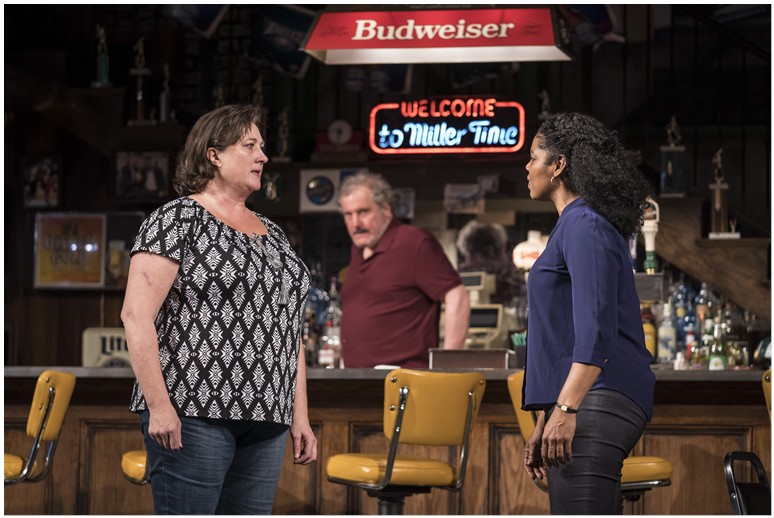 **** Recommended **** “Sweat”, the latest production at the Goodman Theatre has been a difficult play for me to review.  Been there, done that, got the T-shirt.  Lynn Nottage has written a gripping drama about ordinary people whose livelihood is dependent on one factory.  When management decides to make changes, things get ugly.  Judging by my experiences, I think the language used and the emotions expressed are remarkably true to life.  4 Spotlights

Losing your job is like losing your life.  It doesn’t matter whether you’re totally invested in your career, as my husband was when his company went bankrupt or you’re working in a dead-end job which is the difference between paying your bills and starvation, the feelings are the same.  Everyone goes through disbelief, denial, anger, outrage, all the stages of grief.  Everyone has to figure out what to do with those emotions.  Sometimes all that anger finds the wrong outlet.

The lights go up on a stark scene.  There are two young men sitting on institutional-looking gray chairs at opposite sides of the stage.  One is black, the other is white.  One is rather preppy, the other has a white power tattoo on his shaved head.  An older man walks between the two, asking what they plan to do and lecturing about attitude.

In a local bar, three best friends, Cynthia (Tyla Abercrumble), Jessie (Chaon Cross) and Tracey (Kirsten Fitzgerald), are celebrating a birthday in a local bar managed by Stan (Keith Kupferer).  They all work at the plant – the town’s major employer – and have shared everything over the years.  Although Cynthia and Tracey are both on the short list for promotion to supervisor, they vow that nothing will get in the way of their friendship.

Cynthia’s son Chris (Edgar Miguel Sanchez) and Tracey’s son Jason (Mike Cherry), best friends, are new-ish at the plant.  Chris is saving his money for college; Jason just bought a motorcycle.  Oscar (Steve Casillas), who works part-time in the bar, has been trying to get hired at the plant for a long time.

When Cynthia gets the promotion, her friends seem to change.  When rumors start to fly, they become suspicious about her loyalties.  Although she’s lowest on the supervisory totem pole, they expected her to stop the layoffs and blame her when the company locks them out.

While the union members walk the picket line, the company hires new workers at a lower rate of pay.  Against Stan’s advice, Oscar gets a job.  When he comes into the bar to pick up his final paycheck, tragedy strikes.

“Sweat” runs through April 14th at the Goodman Theatre, 170 N. Dearborn, Chicago.  Most reasonable parking option for the Goodman is the Government Center garage on Lake between LaSalle and Dearborn: online advance payment at www.interparkonline.com/goodmantheatre, $17.00.