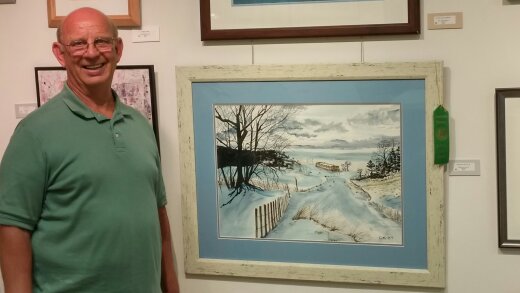 Artist George Millet will have an exhibit and art show at Chesterton Art Center in Chesterton Indiana. The opening reception will be on Sunday, February 7th at 2pm. The exhibit will stay up thru the end of February.

Mr. Millet began showing his art to the public in 2009 after a 32 year career as a heavy machine operator/engineer. “Color, light and mood are the elements that I attempt to establish in my watercolors. I strive to capture the warmth of a summer day or the cool chill of an early morning lake. I am inspired by many of my memories and experiences living all of my life near Lake Michigan in Northern Indiana. I take pleasure in hiking the dunes, hunting the fields, fishing the lakes and streams, and enjoying the lakeshore in all seasons. The dunes and the living things that inhabit them are the subjects of my work, ” he states. As a self-taught artist, Mr. Millet is constantly experimenting with new ideas and techniques. He sees his art as a means of expressing his love of nature and natural environments.

Mr. Millet participates in many art fairs in Michigan, Indiana, and Illinois including Kalamazoo (KIA) Charlevoix, Grand Haven, Chesterton, Lakefront in Michigan City, Leeper Park South Bend, 57th Street in Chicago and Barrington ‘s Art in the Barn as well as many other juried festivals. In 2014 the 5 jurors in South Haven Michigan voted Mr. Millet, “Best Watercolor Artist” 2014. The “Schoolhouse Shops, “Celebration of the Arts” in Furnessville IN. has consistently invited Mr. Millet to participate in their by invitation only venue. The Depot in Beverly Shores hosted Mr. Millet’s work in their gallery and Mr. Millet presented his work in his first solo show at Moontree Studios at Donaldson Center in Ancillia College Near Plymouth Indiana.

Mr. Millet’s watercolor titled “Long Shadows” was a part of the juried Regional Show 2010 at The Midwest Museum of American Art and is now on permanent display at the entrance of the Crystal Ballroom in the newly restored Lerner Theatre of Elkhart. Mr. Millet’s work has been purchased throughout the United States and Europe. Mr. Millet has held memberships at Hoosier Salon, Illiana artists, and 18 artists, and is presently a juried member of Area Artist Association, Northern Indiana Artists, St. Joseph Valley Watercolor Society, Chesterton Art Center and Midwest Museum of American Art.

To find out what’s happening in Chesterton, Indiana Click here