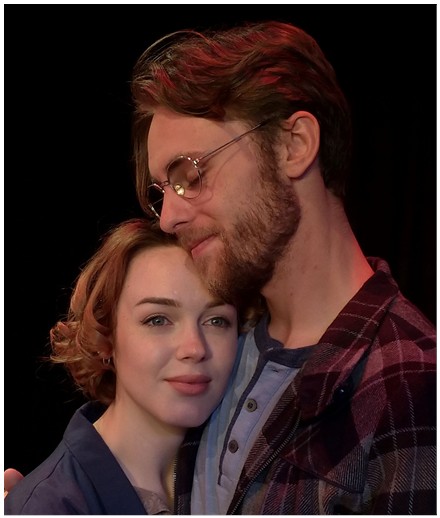 *** Recommended *** If it’s June, it must be time for Canterbury Summer Theatre, one of two true summer stock theaters in northwest Indiana. CST always begins the season with a drama rather than a musical in a very short run (4 days). This year, they’ve kicked off the season with a play called “Constellations” which seemed more like an acting exercise than a fully realized play. As I watched the actors repeat the same lines over and over, I kept thinking to myself, “Are we there yet?” 3 Spotlights

We’re told that Marianne (Elise Birmingham), a theoretical physicist, and Roland (Thomas Hadzeriga), a beekeeper, met at a party, although we see never see a party, and it takes three, maybe four repeats of the initial approach – with minute variations – before they even exchanged names. Zip, zap, the lights change, and they start over again.

Each conversational gambit led to another set of variations, another potential outcomes. In one set, meeting again as near strangers, Marianne admits she bought some of Roland’s honey, which she says was delicious.
Although they don’t have much in common, eventually, they become a couple.

An argument is another set of variations, but curiously, after two or three different versions of the same argument, the playwright threw in a scene done entirely in sign language. Why?

“Constellations” reminded me in a lot of ways of theater of the absurd. The dialog was pretty meaningless, the actors didn’t do much of anything while on stage, and nothing made sense. Even the set, draped with something that looked like plastic shower curtains – fits into the absurdity.

“Constellations” is very well-acted, but oh, so boring. I have to confess, I zoned out somewhere along the line, as did many others in the audience.

“Constellations runs through June 15th at Canterbury Summer Theatre, 807 Franklin Street, Michigan City. Running time is about 70 minutes. Next up at Canterbury, “The Queen Bees”, running June 19th through 29th. Performances are Wednesdays and Thursdays at 2:00 pm, Fridays at 7:30 pm; and Saturdays at 6:30 pm. Tickets are $!6-$17 with discounts for seniors and students. FYI (219) 874-4269, info@cansterburytheatre.org or www.tiny.cc/CST2019.