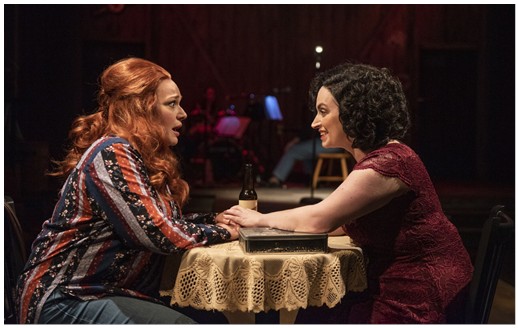 ***RECOMMENDED*** There are not very many jukebox musicals that have an actual working jukebox on the stage. “Always…Patsy Cline,” which was created by Ted Swindley in 1988, is an early example of what a jukebox musical can be, long before that term was even widely used and the concept of taking well-known songs by popular recording artists and forming a narrative to build around them seemed to dominate nearly every other musical that was opening on Broadway from early 2000 until the present day. Firebrand Theatre’s current production of “Always…Patsy Cline” features a vintage Wurlitzer that fits perfectly into this very charming and intimate version of the true story of one of Patsy Cline’s biggest fans which has 27 of her greatest hits interwoven throughout the course of the evening’s entertainment.  3 AND 1/2 SPOTLIGHTS

“Always…Patsy Cline” has been extended by popular demand to January 4, 2020

Running time is one hour and 45 minutes with one intermission