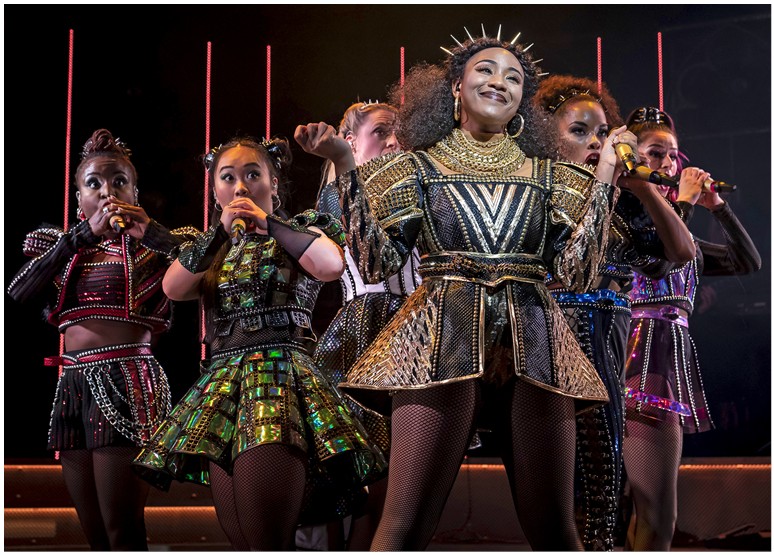 **** Highly Recommended **** I have a new entry to my personal top ten musicals, “Six”! I loved this new pop-rock concert musical starring the six wives of Henry VIII so much that I’ve downloaded the soundtrack – and bought tickets to see it again! How’s that for a recommendation? I’m telling you, I LOVE this show! 4 BIG Spotlights

The ladies, Catherine of Aragon (Adrianna Hicks), Anne Boleyn (Andrea Macasaet), Jane Seymour (Abby Mueller), Anna of Cleves (Brittney Mack), Katherine Howard (Samantha Pauly) and Catherine Parr (Anna Uzele), sing and dance their hearts out in a sort of contest – whoever had the worst life with Henry wins. The songs were all different, most with driving rhythms, all with clever and frequently bawdy lyrics. The musical begins with song called “Ex-Wives” leading with that old rhyme, “Divorced, beheaded, died, divorced, beheaded, survived” and explaining how that got ‘unfriended’!

“No, no, no, no, no” is repeated frequently in Catherine of Aragon’s rockin’ “No Way”. Anne Boleyn, of course, has a hip-hop-ish number, “Don’l Lose Ur Head” in which she texts and shoots selfies before she does lose her head. Jane Seymour, on the other hand, sang about her true love for Henry in her ballad, “Heart of Stone” – and of course she thought she should win because she died before she could ever hold her baby.

All of the queens donned glowing white ruffs and sunglasses to sing “Haus of Holbein”, a laugh-out-loud hilarious look at German royalty and the artists who painted their portraits. Henry chose “Anna of Cleves” on the basis of a miniatures. In her song, “Get Down”, she explained that divorce was inevitable but she had a pre-nup! In “All You Wanna Do”, Katherine Howard sings about how the men in her life objectified her, and then she met Henry, who really objectified her then had her beheaded. Finally, “In I Don’t Need Your Love”, Catherine Parr explains that she had a life before Henry – and had one after he died.

In the final song, “Six”, they realize that they are only famous because there were six of them – but on the other hand, nobody would remember Henry except – six!

Kudos to costume designer, Gabriella Slade who designed six sparkly modern costumes, with hints of Elizabethan style, a ruff here, a squared panier there, a puffed sleeve here, laces there. All the ladies had sparkly high-heeled boots too.

Honestly, you’d have thought this was a major rock concert judging by the audience screaming and cheering for their favorite songs. Many had obviously already downloaded the sound track, since they were singing along.

“Six” premiered at the Edinburg Fringe Festival, and had a short run in London’s West End. This is the first American performance. Could Broadway be on the horizon? Stay tuned … Hurry and order your tickets, they’re selling like hotcakes.

“Six” has been extended through August 4th in the Yard at Chicago Shakespeare Theater on Navy Pier. Parking is available at a 40% discount in the Navy Pier Garages with validation from CST.