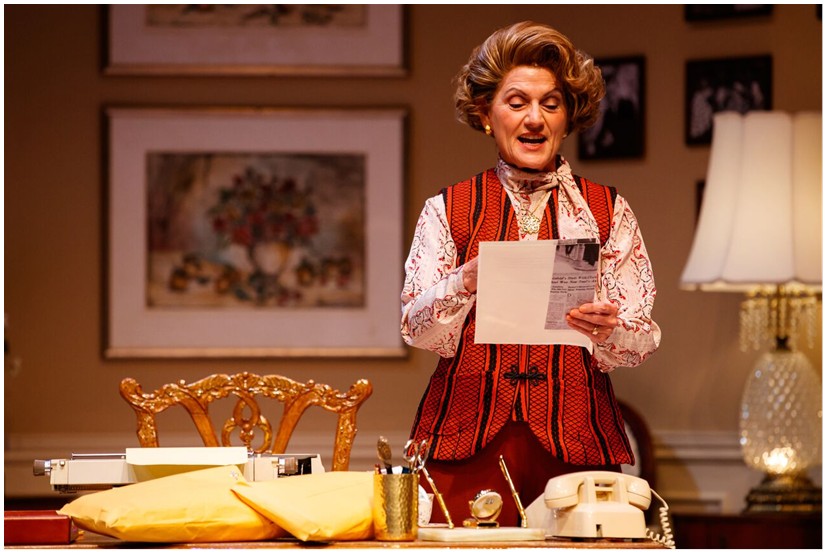 Meet Ann Landers, “The Lady with All the Answers” at Theatre at the Center

**** Recommended **** Theatre at the Center’s production of “The Lady with All the Answers” is a perfect play for these hot summer days/nights. It’s a warm, humorous and very personal glimpse into the life of Esther Pauline “Eppie” Lederer, the woman behind “Ask Ann Landers”. I remember watching ‘Ann Landers’ on Irv Kupcinet’s TV show – a long, long time ago – and I think Janet Ulrich Brook was perfect in the part. In addition to Lander’s signature ‘helmet’ hairdo, she also mastered her unusually sharp speech patterns. Don’t miss “The Lady with All the Answer”, you’ll really enjoy it. 4 Spotlights
David Rambo’s bio-play takes place late one night as “Eppie” (Brooks) is trying to write a column. The writing isn’t going well – sometimes the words just aren’t there, as I know all too well – so “Eppie” finds excuses not to write. She’d sit down at her desk, type a couple of words, then get up and roam around the room. She’d put on her fur coat, a gift from her husband, she said. She picked up letters from file boxes around the room. She answered the phone, even though she pretended to be annoyed when it rang.
Instead she shared a few anecdotes about her twin sister, “Popo”; even more about her readers and their problems. She’d read a letter, then her response. She thought some were interesting enough to include in her book, but most were not. She was always amazed that so many letters had questions about sex.
One of the most interesting stories was one about her trip to Viet Nam in the middle of that awful war. While ‘in country’, she visited every hospital she could find, then listened to every wounded serviceman’s story and offered to call his family when she got home. She said that she ended up making more than 2500 phone calls, and never said a word about it in her column.
Another concerned an upcoming interview that her friend “Kup: (Irv Kupcinet) had scheduled with Linda Lovelace, the star of “Deep Throat”. “Eppie” said she didn’t even know what ‘deep throat’ meant. When she found out, she decided she needed to be on that TV show too. Before Lovelace could say a word, “Eppie” jumped in and explained exactly what the phrase ‘deep throat’ meant, in detail, for the entire TV audience.
Finally, She even left – to take a bath, she said – inviting the audience to take a break too.
“Eppie” admitted that her most difficult column was about her own divorce. She said that until that day, she’d always advised her readers not to get a divorce because she thought every problem could be worked out – until her husband asked for a divorce. In that column she wrote, “The sad, incredible fact is, that after 36 years of marriage, Jules and I are being divorced.”
I loved Angela Weber Miller’s set design. Ann Landers’ office is warm and inviting, with just enough photos on the wall to be intriguing. In fact, I had an urge to walk up and browse through the bookshelves.
A few factoids:
• “Eppie” Lederer took over the “Ask Ann Landers” column in 1955, and continued to dispense advice until 2002.
• “Eppie” had a competitive love-hate relationship with her twin sister Pauline Esther “Popo”, who wrote “Dear Abby”
• The Lederers had a luxurious apartment on Lake Shore Drive
• “Eppie” was a prominent figure in Chicago society
• “Eppie” was a close friend of Sun-Times columnist and TV personality Irv “Kup” Kupcinet
• “Eppie” worked from home, mostly late at night, writing her columns on a manual typewriter

When you go, be sure to check out the fabulous exhibit, Making Headlines: From Ann Landers to Walter Winchell, in the South Shore Arts Atrium Gallery. The entire exhibit, which includes everything from pictures to Ann Landers’ portable typewriter to Irv Kupcinet’s chair, is from the private collection of Phil Potempa, TATC Marketing Director and columnist for the Post-Tribune. The exhibit runs through September 3rd. The Center for Visual & Performing Arts is open Monday through Friday from 9:00 am to 5:oo pm; Saturday from 9:00 am to 4:00 pm; and Sunday from 11:00 am to 4:00 pm.
“The Lady with All the Answers” runs through August 12th at Theatre at the Center, Center for the Visual & Performing Arts, 1040 Ridge Road, Munster. Parking is free. Running time is about 90 minutes with an intermission. Performances are Wednesday and Thursday at 2:00 pm; Friday at 7:30 pm; Saturday at 3:00 and 7:30 pm; Sunday at 2:30 pm; with select Thursday and Sunday night performances. Tickets range from $42-$46. FYI (219) 836-3255 or www.theatreatthecenter.com.