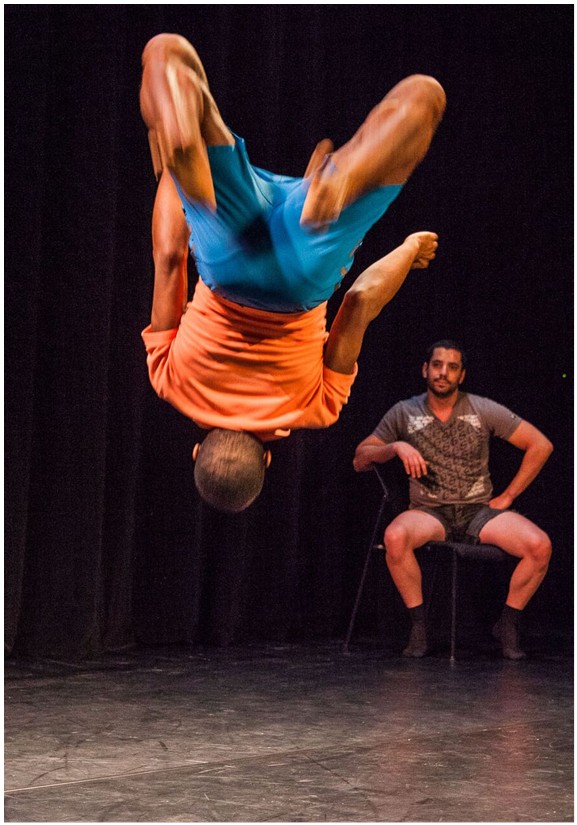 The Lucky Plush “Tab Show” was a humorous and colorful theatrical dance work choreographed by Julia Rhoads. The company is committed to something they call a “palpable live-ness” shared by the performers in real time with the audience. Where most dance companies use a musical accompaniment, Lucky Plush often generates their own, with speech and/or song. The experience is unique! 3 Spotlghts

I first ran across the Lucky Plush dance company when I saw “Trip the Light Fantastic: The Making of SuperStrip”, a blend of contemporary dance, theater, video and comic book graphics. Then last year, I saw “Rooming House”, an entirely new blend of theater and contemporary dance, a part of Steppenwolf’s LookOut Series. The Lucky Plush company tried to answer the question; what makes a person do something that has potentially life-changing consequences? The result – a fascinating, somewhat chaotic game of Clue!

In the roller rink culture, people are constantly on the move, anonymous parts of a larger rink community, with individual stylings and group dynamics, movement and song constantly changing. “Rink Life” is a recreation of those family evenings at the rink when everyone skates to popular songs. By humming, singing or talking, the company generates their own accompaniment. I heard snatches of the Bee Gees’ “Stayin’ Alive”, and the Beatles’ “Hey, Jude” along with some Cat Stevens and more. I don’t know if it’s the Harris, or the hanging mics, but I could barely hear/understand what they were saying.

The second act, “Curb Candy” reminded me of old black and white movies, what with the company all wearing costumes in shades of black, gray and white and moving in kind of a Keystone Kops style. The work began with two people wearing crash helmets crawling across the stage in slow motion, until they literally crash head-on in the middle. As they try to get around each other, there’s more head to head contact and lots of falling over. Eventually they tried to sit on a couple of folding chairs, falling up onto them, then falling off.

After they finally settled into the chairs, they started talking about being two women on a bench, at least until a man in a helmet sat on the bench, and informed them that they can’t be two women on a bench any more. Then the three of them played a variation of Chinese telephone, whispering secrets and changing positions.

After duck-walking across the stage carrying giant white helium balloons, two women danced with their balloons, in a routine vaguely reminiscent ribbon gymnastics. After they leave the stage, the three on a bench start playing with their own balloons.

Lucky Plush will bring “Rooming House” to the Kennedy Center in Washington, D.C. May 2nd through 4th, 2019.