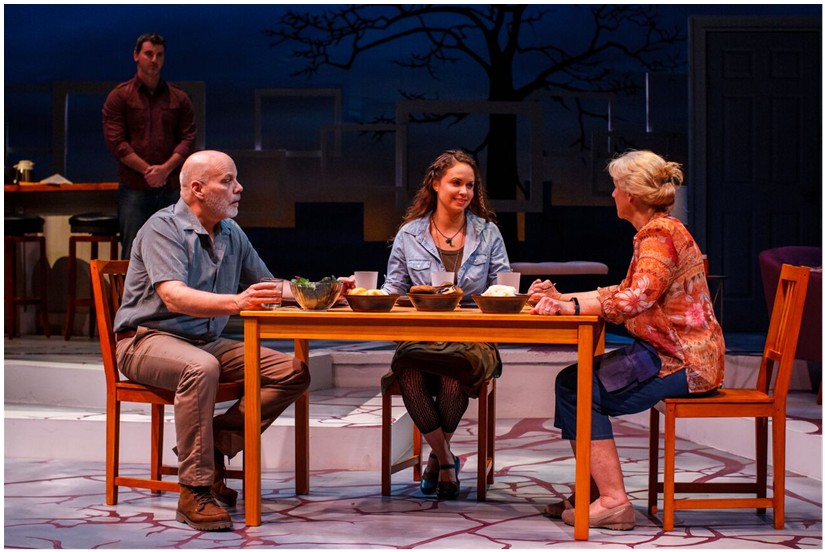 With Its Heart-Warming Story, “The Tin Woman” moved Me to Tears

**** Highly Recommended **** Theatre at the Center’s production of “The Tin Woman”, is one of the most heart-warming, yet gut-wrenching stories I’ve ever seen.  Although there were hearty laughs in places, I don’t think there was a dry eye in the audience by the end.  In fact, TATC ushers were waiting at all the exits to offer boxes of tissues for a post-show mop up!  Kudos to Director Linda Fortunato and the superb cast for bringing this wonderful story to the TATC stage.  “The Tin Woman” is on my top ten list for 2017!  4 BIG Spotlights

In a coffee bar, the lives of two random people intersected when a man (Doogin Brown) asked a woman (Erin Noel Grennan) for the cinnamon.  She jumped all over him for hitting on her, until she realized he actually was asking for the cinnamon.  She apologized, they exchanged polite remarks, and they moved on with their lives.

In a hospital room, Joy (Erin Noel Grennan) is recovering from a heart transplant.  By the way, that’s the tie-in to Oz-like title.  She’s got an annoying Nurse (Jeri Marshall) – you know, the one who always asks “How are we doing?” – getting on her last nerve.  Joy is a stand-offish person who doesn’t like to be touched, so she uses snarky, sarcastic jokes to protect herself.

Jack (Doogin Brown), Joy’s donor, stands guard near her hospital bed.  He’s in the background at his parents’ home, watching over them.

Once home, Joy won’t leave her apartment – or even get dressed.  Her best friend, Darla (Jeri Marshall), who makes a fashion statement with each appearance, visits even when Joy says she doesn’t want visitors.  Darla tries to get her moving, even insisting she take a shower and get dressed.  Joy is almost angry about the transplant, because she’d come to terms with dying, then this heart came along.  When she mentions contacting the donor’s family, Darla reminds her of the rules against it.

We meet Hank (Steve Pickering) and Alice (Annabel Armour) sitting on an icy cold bench near their son’s grave.  Alice is trying her best to keep the family together but Jack is making it difficult.  He’s angry, brooding and unable to communicate. He’s not hearing anything anyone says, either.

When Alice starts packing up Jack’s things to donate, Hank is furious.  When he catches her listens to Jack’s I-pod, he’s furious, and starts throwing Jack’s things around the room.  Alice grabs Jack’s camera before Hank can throw that too.

When they get a letter from Joy, Hank refuses to even read it.  Alice thinks that meeting Joy will help her to heal, so she invites her to dinner.  Hank is furious while their overly enthusiastic daughter, Sammy (Kayla Kennedy), is thrilled to give her new ‘sister’ a hug!

Hank stormed out of the house before Joy even arrived.  The dinner party is an evening fraught with pitfalls:

Uncomfortable with all this family drama, Joy decides to leave, so Alice offers to drive her to the train.  On the way, they make a stop at cemetery where Joy remarks on the icy bench.  Ultimately, she invites Hank to listen to Jack’s heart, helping him to heal.

At the opening night reception, playwright Sean Grennan, who flew in from New York for the opening, thanked his sister, Erin Noel Grennan, for giving him the idea.

“The Tin Woman” runs through August 13th at Theatre at the Center, Center for the Visual & Performing Arts, 1040 Ridge Road, Munster, Indiana.  Running time is one hour, 55 minutes, with an intermission.  Performances are Wednesdays and Thursdays at 2:00 pm; Fridays and Saturdays at 7:30 pm; Sundays at 2:30 pm; and select Thursday and Sunday evenings and Saturday matinees.  Tickets range from $40-$44.  Parking is free.  FYI (219) 836-3255 or www.theatreatthecenter.com.