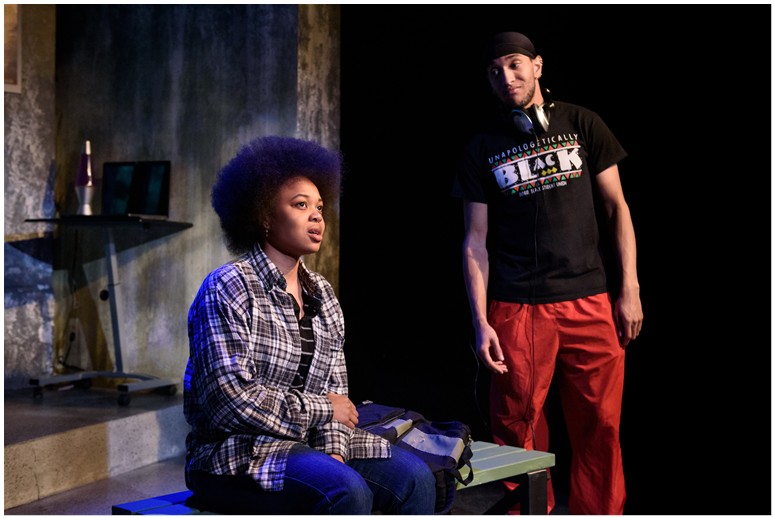 *** Recommended *** After a couple of weeks off, I always look forward to Pegasus Theatre’s Young Playwrights Festival which is almost always the first theatrical opening of the year. This is a chance to see the future of Chicago theater – maybe the future of American theater. If you go, you’ll see three very different plays written by three young women who happen to be all high school students so you also get some insight into the things on kids’ minds. 3 Spotlights

These kids didn’t just win a city-wide competition, although that’s impressive enough. They got to work with professional directors to workshop their plays, which are then produced in a real theater with professional actors. If that isn’t enough, Pegasus Artistic Director, Ilesa Duncan presented all three playwrights (who were in the audience on opening night) with a commemorative plaque and a cash award.
The ensemble cast, Vincent Banks, Grace Bolander, Juan Mares Castillo, Marianna Gallegos, Sam Godinez, Kameron Villavicencio and Jamia Taylor, appear in all three plays.

Patrick has been best friends with the girl who lives next door since first grade. His online friends group, the only place he feels safe and comfortable, encourages him to come out, but when he does, she doesn’t handle it well. She says she thought he was straight because he dated, he says that’s part of how he found out he was gay. She goes on and on about boys she’s crushing on, when he mentions someone he’s interested in she shuts him down. When she uses homophobic comments in casual conversation and accuses him of a political agenda, he avoids her. Patrick feels safe to confide in his online friends group.

After several of his friends and relatives were shot, a boy named Faith is struggling with their loss, brooding in his room. When his mother makes him leave the house, he ends up in the park where he meets Hope, a girl with a horrible home life. Her mother is a stereotype of all the mean parents/stepparents in literature – only meaner! They make a connection which changes both of their lives.

Brother and sister Ernesto and Violeta lost both of their parents in a car crash. Now the siblings are trying to keep the family coffee shop afloat by pleasing the Wicker Park yuppies. Trying to run the shop is a full-time job so Violeta is angry and resentful because her brother isn’t there as much as she is. He has a wife, a baby and a job, so he’s giving as much time as he can. She’s exhausted working, going to school and trying keep up with her writing. She says she’s trying to honor their parents, but when Ernesto convinces her that the coffee shop was their dream not hers, she’s finally willing to let it go.
In addition to the three winners, many of the finalists and honorable mention winners were in the audience to receive their awards.

The 32nd Young Playwrights Festival runs through January 27th at Chicago Dramatists, 1105 W. Chicago Ave., Chicago. Please note: theatre entrance is around the corner at Aberdeen & May Streets. Metered street parking is available. Do not park in the lot next to the theater, you will be towed! Running time is about 90 minutes with an intermission. Performances are Fridays and Saturdays at 7:30 pm; Sundays at 3:00 pm. Tickets range from $18-$30. FYI (866) 811-4111 or www.pegasustheatrechicago.org.