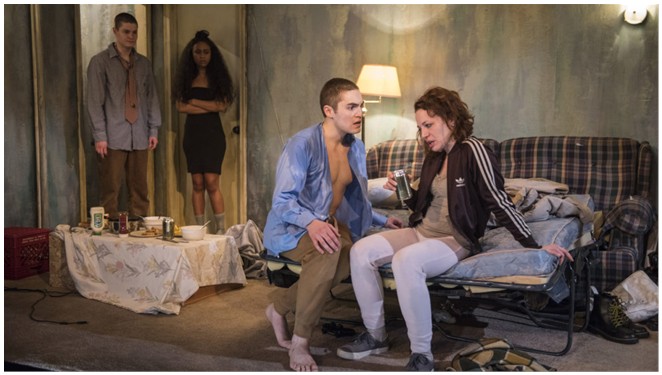 ***RECOMMENDED*** For the two young brothers at the center of Anna Jordan’s play “Yen” it may initially appear that all they need is a strong dosage of love. No offense to Lennon and McCartney, but sometimes love is not always all that you need. These adolescent ruffians could have greatly benefited from a firm regulating hand in their early family life and development; to at least have had one dependable and sober parent to always be there for them in times of turmoil and to teach them valuable life lessons and make them feel secure along the way. Sadly, left to their own devices, which include PlayStation 4 gaming and streaming pornographic videos, it’s not surprising to witness the wretched and unfortunate outcome of these truly uninspired youths.  3 SPOTLIGHTS

Sixteen-year-old Hench (Reed Lancaster) lives with his thirteen-year-old brother Bobbie (Jesse Aaronson) in a grungy tenement flat in rough and tumble Feltham, which is nearly 30 miles west of London. Their mother Maggie (Tiffany Bedwell) has abandoned the two boys in the subsidized housing estate to go live with her current boyfriend Alan.

With no means for generating any income, the brothers are forced to steal food from the corner market in order to be able to eat. Also, the very meager amount of money that they do have they don’t want to waste on doing a load of laundry, so they wear the same grimy pair of jeans or sweatpants continuously and alternate sharing a single soiled T-shirt if they must cover up their torso in order to go outdoors.

The other creature sharing their flat is a dog named Taliban who remains confined to a room and never taken out for a walk. When Bobbie describes how they came up with the dog’s name the sheer ignorance of these two brothers may cause you to cringe. With very little mental stimulation or common interests that would lead to bonding conversations the brothers tend to spend a lot of time physically wrestling with one another in an attempt to replicate affection or — oddly — respect. But they are both wrestling with some pretty heavy personal problems as well. Hench has repeated nightmares in which he is thrashing in his sleep and often wets the bed. Bobbie is clearly devastated by his mother’s desertion and the fact that he never knew his father.

When Maggie does show up to check in on the boys, she is so drunk that it is they who need to take care of her. Both boys, who happen to have different fathers who were both absent from their lives, want to believe Maggie when she tells each of them, confidentially, that their father died heroically saving a young girl from drowning in the local pond. In all reality, it is suggested that at least one of their fathers died from an intravenous drug overdose.

Entering their dismal world is Jennifer (Netta Walker), an older teen who lives across the thoroughfare and whose unit is visible from Hench and Bobbie’s window. The two boys spy on her and it seems that Hench may have a sexual attraction towards her. Jen is a pet-lover who recently relocated from her native Wales to live with distant relatives on the estate. She hears the dog constantly barking but realizes that they never take it out for a walk. Becoming the dog’s sole caregiver, Jen also eventually becomes a surrogate mother to the boys as well and they form a non-traditional family unit, even sharing a fancy dinner around a make-shift dining room table. But lacking the proper tools to enter and foster mature adult interpersonal relationships, both Hench’s and Bobbie’s brash and loutish behavior causes a highly destructive result. When Bobbie acts upon his burgeoning but confusing sexual desires the violent deed shatters the hopeful and idyllic familial bond that these three were just starting to create.

There is a sentimental duality to the title of Jordan’s play. Yen is the nickname that Jen’s now- deceased father used to call her when she was a small child, since it rhymes with her name. Eventually, Jen allows Hench to call her Yen, once he has earned her trust. In turn, he lets her call him by his birth name, which is Paul. But “yen” also has a more archaic meaning — a strong desire or craving. All four of these lost souls are desperately longing to love and to be loved. That’s what makes this “Yen” such a heart-wrenching tragedy.

Running Time: 2 hours and 15 minutes with one 15-minute intermission.