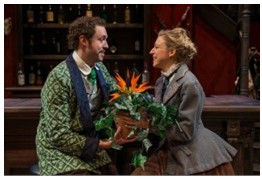 During the reign of Queen Victoria, many members of the British upper-class belonged to exclusive clubs, often devoted to specific – and frequently eccentric – goals.  Because they took themselves so seriously, it’s easy to poke fun at them.   The Windy City Playhouse production, “The Explorers Club” is a silly, rather slapstick spoof of one of those clubs.  Under David H. Bell’s direction, the cast members deliver their silly lines with panache.  I laughed until my cheeks hurt, so I give “The Explorers Club” 4 Spotlights.

“The Explorers Club” runs through April 17th at Windy City Playhouse, 3014 West Irving Park Road, Chicago.  Running time is just under 2 hours with an intermission.  Performances are Wednesdays and Thursdays at 7:30 pm; Fridays and Saturdays at 8:00; and Sundays at 3:00.  Tickets range from $15-$55.  Metered street parking is available.  FYI (773) 891-8985 or www.windycityplayhouse.com.