by Carolyn A. Marsh
Reprinted from the WRite Stuff News Magazine, November 2016

An uncommon Brant Goose was with Canada Geese in the north basin of George Lake in Hammond. Alan Bruner and Rusty McIntyre discovered the goose on Sept 16.  Alan drives up from Marshall, Indiana to bird the lakefront every year or two and found the rarity. The Brant stayed until Sept. 19 allowing many birders in Indiana and Illinois to see it.

Compared to the Canada Goose, the Brant is smaller, about mallard size, with a short, stubby bill.  Another difference is the Canada has a prominent white chin strap, whereas the Brant has a white partly broken collar. This Brant was a juvenile with a black head, neck and chest and it lacked the partial white collar. Brants are abundant along both coasts where it also winters. It breeds in the high Arctic tundra.

Many visitors after seeing the Brant stopped at the Hammond Bird Sanctuary located next to the Hammond Marina on Lake Michigan. At the turnstile gate entrance to the sanctuary trail, there is an educational bird observation station with donated bird feeders and birdbaths. It is specifically maintained with dead trees and branches for perches so folks can see the birds in the open. With binoculars, it is then easier to identify what kind of vireo, warbler, sparrow, woodpecker or thrush it could be.

It has been an exception fall migration with songbirds consistently present from the end of August through September. On the Indiana Official State Bird Checklist, there are 39 warbler species and an incredible 26 of them were seen in the sanctuary.

One of the most coveted birds is the Connecticut Warbler. I saw it five times in the sanctuary starting on September 1. Birders from even Inianadpolis and Bloomington came to see it this year (to add it as a first to their personal Life List of Birds.)  It was heartwarming to witness groups of birders enjoying themselves watching the birds in the sanctuary. 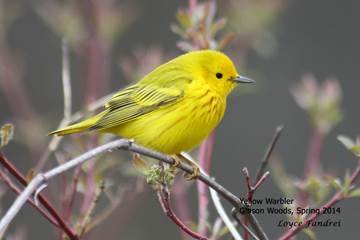 Read More of Our Birding Articles: