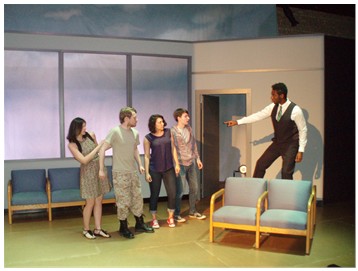 Towle Theater’s “Standby” blew Me Away!

**** Highly Recommended **** The Towle Theater is one of the best-kept secrets of northwest Indiana.  Their summer production, the Midwest premiere of “Standby”, is as good, if not better than many of the shows I see in Chicago.  It blew me away, it’s that good!  Kudos to Director Jeff Casey, I used at least 4 tissues while watching “Standby”.   Hurry and get your tickets, “Standby” closes July 23rd.  4 BIG Spotlights

Four people are trapped in a place that looks an awful lot like an old-fashioned airport waiting area.  There are doors that won’t open and windows that show nothing outside.  They are all angry, trying to figure out how they got here.  They introduce themselves to each other as Richard (Kevin Bellamy), an engineer/inventor, Andrew (Quinn Rigg), a student, Samantha (Natalie Rae, who lost her entire family in a plane crash and Jonathan (Nate Strain), a soldier suffering with guilt and PTSD.

Suddenly, the lights go out and a loud klaxon starts blaring.  When the lights come back, they see the door closing behind another person.  Jonathan immediately recognizes Cynthia (Sarah Jean Mergener), his girl friend, who won’t/can’t say anything about what’s out there.

The next time the lights go out and the klaxon blares, they’re joined by a man who says his name is Peter (Dwayne Everett).  Peter tells them that two will be leaving here – wherever here is – and they have to figure it out, and he leaves.

SPOILER WARNING – They’re all dead, Peter is the gatekeeper and this is a sort of holding area.  Somehow their lives are connected and they have to figure out the connection before they can move on.

The music is haunting – with songs like “Waiting”, “Forward Motion”, “Left Behind”, “Last Goodbye” and “What the H E double L”.  While I thought all the voices were amazing, I was gobsmacked by the powerful voice of newcomer, Nate Strain.

“Standby” runs through July 23rd at the Towle Theatre, 5205 Hohman Avenue, Hammond.  Running time is 90 minutes, no intermission.  Remaining performances are Friday and Saturday, July 21st & 22nd at 8:00 pm.  Sunday, July 23rd is sold out.  Free parking is available just off Fayette Street with entry to the Towle through the entrance at the rear of the theater.  FYI (219) 937-8780 or www.towletheater.org.