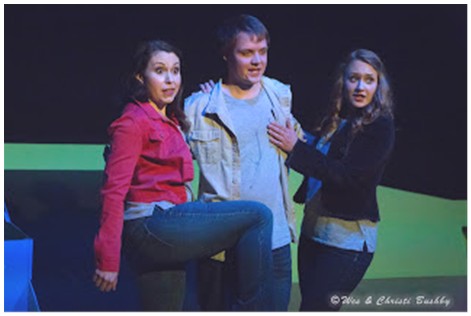 Towle Theater’s “Little by Little” is a Charming Story

**** Recommended **** “Little by Little”, an encore production at Hammond’s Towle Theater, is a charming little show about three people, two girls and a guy, who ruin a lifelong friendship with sex! Technically, “Little by Little” is an operetta, since it doesn’t have any dialog, but don’t let that scare you away. The charming lyrics are written with a sense of humor. Don’t miss this must-see. 4 Spotlights (Photo by Wesley Bushby)

The three characters don’t have names, they are just Woman 1 (Sarah Sapperstein), Woman 2 (Tamara Bodnar, and Man (Brandon Michaud), singing about “Friendship and Love”. The connections: Woman 1 + Woman 2; Woman 1 + Woman 2 + Man; Woman 1 + Man; and finally Woman 2 + Man.
• As kids, they lazing around, pouting because they’re bored, singing about “Homework” and ‘Tag”
• As they grow up, there’s a kindling of interest in the opposite sex. At a movie, Man sings “Popcorn”, which is all about the temptations at the movies
• Her friends put poor Woman 2 in the middle their relationship as they both had her a phone and ask for advice in “Just Between Us”
• They’re grown up now, and starting real jobs in “A Little Hustle”
• Woman 2 loses her cool and opts out of the friendship with “I’m Not”
• After the couple breaks up, all three accidentally meet at the movies with “Popcorn II”