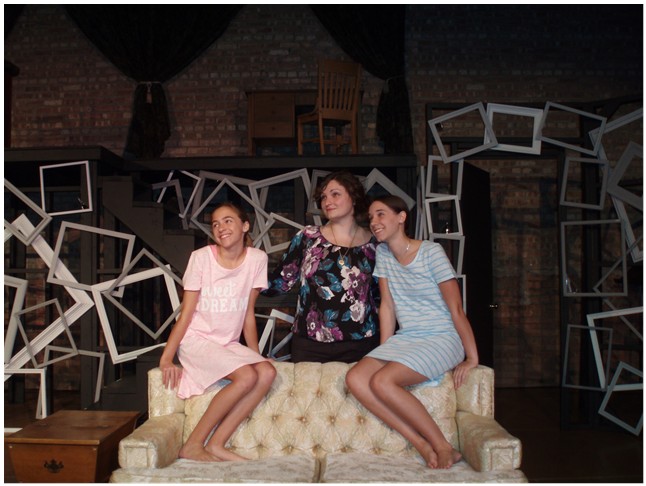 *** Recommended *** The Towle Theater’s new production, “The House of Mirrors & Hearts”, is a dark, brooding yet ultimately hopeful story.  It’s not quite a musical, although it has beautiful, haunting music.  I would call it a play with music, instead.  The subject matter is difficult, so I can’t really say I liked the play, but it had an impact, nonetheless.  I give it 3 ½ Spotlights.

The story opens at Anna’s home in England one morning seven years ago.  Anna (Kelly Bourget), who has an absolutely gorgeous voice, and her young daughter, Lily (Paige Lichnerowicz), are having a perfect morning.  In answer to Lily’s question about why her father’s workshop is off-limits, Anna explains the process involved in making a mirror in a song called “Freehand-Quicksilver”.

Anna’s other daughter, Laura (Claire LeMonnier), inexplicably seems to be absent.  When she eventually finds her, it is clear that something terrible has happened.

The story then shifts to the present.  Anna and her daughters, Laura (Maggie Ward) and Lily (Chloe Rodabaugh), are still living in the same house and dealing with the aftermath of an inexplicable event.  Only one person knows what actually happened, and she’s not talking.

They need extra income, so Anna has decided to take in a boarder, Nathan (Ian Rigg), who is doing research on an obscure 18th century poet.  The other boarder, David (Kevin Bellamy), warns Nathan to stay away from Laura, dropping dark hints about the past.

The plot is very slow in developing.  In some spots, it dragged.  I think “The House of Mirrors & Hearts” would work better as a one-act play.

By the way, kudos to Kevin Bellamy for an interesting set decorated with a bewildering multitude of frames and broken mirrors.

“The House of Mirrors & Hearts” runs through July 23rd at the Towle Theater, 5205 Hohman Ave., Hammond.  Running time is just under 2 hours with an intermission.  Performances are Thursday through Saturday at 8:00 pm; Sunday at 2:00.  There is no performance on July 8th.  Tickets are $19.  Parking is free in the lot directly behind the theater.  FYI (219) 937-8780 or www.towletheater.org.