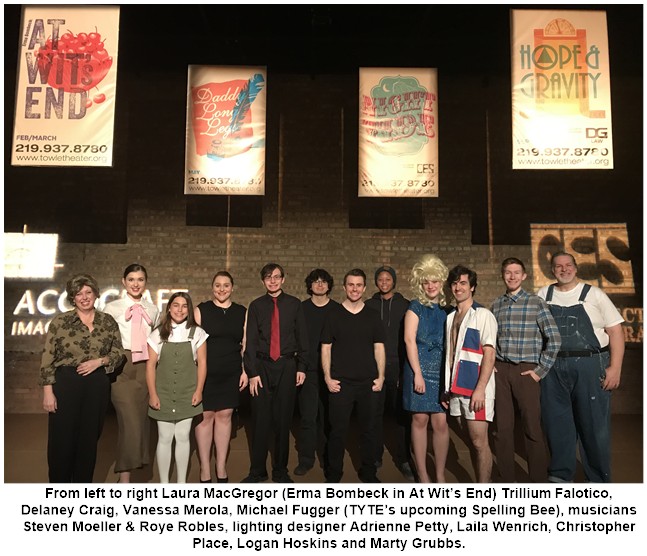 The Towle Theater’s annual Season Preview is always a lovely event. It’s a short evening, just about two hours, with a reception (light hors d’oevres and drinks in the lobby) followed by a season sampler, typically a short scene or a single song from each. Two plays and two musicals make up the Towle 2020 season, “Theater with Vision – It’s all in how you look at it”. Managing Director Jeff Casey introduced each play, explaining how and why it was chosen.

Leading off the season is a one-woman show, “At Wit’s End”, running from February 21st through March 8th. “At Wit’s End” is a comedy starring Laura MacGregor as humorist, Erma Bombeck. Bombeck wrote three hilarious books filled with funny stories and pithy quotes. One of my favorite Bombeck witticisms – “If life is a bowl of cherries, what am I doing in the pits?”

By the way, all the scenes and songs were performed by Towle volunteers, many of whom have appeared in recent productions. MacGregor was the only actor already cast for this season. The volunteer ensemble included Delaney Craig, Trillium Falotico, Michael Fugger, Marty Grubbs, Logan Hoskins, Vanessa Merola and Christopher Place. Towle Music Director Elizabeth Tuazon was joined by Steven Moeller and Roye Robles. Even Lighting Designer Adrienne Petty volunteered his time.

Next up is an old-fashioned musical, “Daddy Long Legs”, running from May 1st through 17th. This is a rags to riches story about a young woman and her mysterious benefactor. Casey mentioned that this musical is nothing like the movie starring Fred Astaire, although he does recommend watching the movie!

Casey said they’re really proud of the young people involved in the Towle Youth Theater Ensemble and what they’ve accomplished. March 28th through April 5th, they will be doing “The 25th Annual Putnam County Spelling Bee”. In a nice twist on the usual adults playing teens, this production will have teens playing teens.

Casey led into his introduction of the summer musical by saying they’d noticed a trend toward sad and/or depressing musicals during the summer so this year they were going to lighten up. Night Tide, running from July 10th through 26th, is a very ‘60s musical comedy about Johnny Drake, a lonely sailor and Mora, a sideshow mermaid.

The final show of the season, running from September 11th through 27th, is a comedy called “Hope & Gravity”, which looked really intriguing. Nine people, whose lives are connected in surprising ways, get into an elevator in a high rise apartment building somewhere, only to be stuck while ‘normal’ maintenance checks are done.

Finally, Casey announced that after a hiatus, “A Fabulous Fifties Christmas” will return this year in late November-early December. In the meantime, many of the vintage fifties costumes from the show would be appearing in the Friends of Hospice fashion show, Friends & Fashion, February 9th. Tickets are available at https://www.eventbrite.com/e/friends-and-fashion-style-show-tickets-84302100853?aff=erelexpmlt.

For Jeff Casey, the Season Preview is an extremely successful marketing tool since many of the people who come to the preview become subscribers. I’ve often wondered why other theaters don’t offer a preview. If you think about it, it makes sense. Ask yourself the question, how do people pick the place they’ll spend their entertainment dollars? More than likely they’ll pick plays/musicals they’re familiar with. Since the Towle specializes in new, quirky, sometimes edgy plays/musicals, the preview is the perfect time to introduce their audience to their selections.

The Towle Theater is located at 5205 Hohman Avenue, Hammond. Parking is free in the lot accessed from Fayette Street, then enter the Towle from the alley door. FYI (219) 937-8780 or www.towletheater.org.