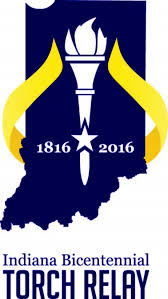 More than 50 people who have made a difference in their communities have been selected to be torchbearers when the Indiana bicentennial torch passes through Porter County on Oct. 9.

The torch run, which is going through all 92 Indiana counties, is the signature event of Indiana’s bicentennial in 2016. “We are pleased to have so many people who have contributed greatly to Porter County serving as our torchbearers,” said Ken Kosky, Porter County Bicentennial Coordinator.

“We hope the entire county turns out for the torch kickoff at Indiana Dunes State Park, or to see the torch carried through Valparaiso and Portage.”  What follows is information about the 55 people selected as torchbearers in Porter County:

Anthony Paetsch, 11, of Porter is involved in sports, spelling bees, volunteers and makes the honor roll, all while batting a form of muscular dystrophy and heart defects.

Alexandra Halkias of Chesterton earned degrees at Indiana University Northwest (IUN) and Valparaiso University (VU) while working full time as a CNA and raising a family.

Barbara Young of Valparaiso has been president of the Porter County Community Foundation for 18 years, tackling homelessness, substance abuse and literacy.

Paul Boyter of Chesterton is a member of the Indiana Real Estate Commission, Past Realtor of the Year by Greater Northwest Indiana Association of Realtors (GNIAR) and active in Junior Achievement.

Laura Harting of Valparaiso was the Executive Director for the Visiting Nurse Association of Porter County for 41 years in which she helped establish Meals on Wheels, respite care, hospice and flu shots.

Chris Mahlmann of Valparaiso unites communities though Ideas in Motion Media, showing good news that happens in the community.

Chuck Harris of Valparaiso, Porter County coroner, improves the standard procedures to make sure loved ones that have passed are treated with great care and does programs to reduce deaths.

Marlo Colburn of Ogden Dunes wished for her fourth birthday to be given Play-Doh so she could donate it to Riley’s Hospital in Indianapolis. 22 pounds of Play-Doh was donated to Riley’s in Marlo’s name.

Stephanie Crook of Valparaiso is a biology teacher at Hebron High School and an Ivy Tech professor and has Multiple Sclerosis, yet keeps a positive attitude, is an enthusiastic athlete and volunteers.

Grady “Dale” Tuck of Valparaiso is an avid runner who promotes community fitness and is the vice president of the Hebron Chamber of Commerce.

Duane Davison of Valparaiso is chairman of the Citizens Advisory Committee of the Porter County Recycling and Waste Reduction District, advisor to the Valparaiso Pathway Committee, and founder and board member of the Valparaiso International Center.

Eric Zosso of Valparaiso served on the United States Air Force and then switched to Air Force Reserves. Zosso now works on projects in Porter County to create a better quality of life.

Dr. Ric Frataccia of Valparaiso, who has served superintendent for three separate districts in Porter County, volunteers and serves as a board member for service organizations.

Esteban “Danny” González of Portage, is an RN at St. Mary Medical Center and serves on the Portage Chamber of Commerce Board of Directors and the Portage Senior Advisory Committee.

Jon Groth of Valparaiso is director of the Porter County Career and Technical Center, member of the Valparaiso Noon Kiwanis Club, Army veteran and volunteers.

Lela Hewlett of Valparaiso, 4H leader for 28 years, participates in many volunteer opportunities.

Larry Hitz of Valparaiso develops neighborhoods with high quality of life for residents and volunteers with non-profits.

Jan Dick of Valparaiso, retired multi-term councilman that helped develop Fairgrounds Park, Central Park and the extension of bike paths throughout the city.

Jay Edwards of Valparaiso is a high school student on the honor roll, Key Club member, student council representative, a member of the cross-country team and owns a lawn mowing business.

Michael Jones of Valparaiso, an avid runner, completed over 55 marathons and ultamarathons, is an avid sailor, completed 28 Chicago to Mackinac races and is heavily involved with the Valparaiso YMCA.

Wendy Mang of Porter is community manager for the American Cancer Society, overcame breast cancer and works directly with the Relay for Life program in Northwest Indiana.

Marian Dick of Valparaiso taught at the Porter County Career and Tech Center and volunteers.

Christina Matoski of Valparaiso, nurse practitioner, performed CPR on a three-year-old boy who was underwater for seven minutes and he survived.

Jerry Wagenblast of Valparaiso educated young citizens through Hoosier Boys State Program for the past 50 years, received the Sagamore of the Wabash award and is an honorary alumnus of VU for his service as a mathematics professor.

Joanne Jones-Wagenblast, retired elementary school teacher, volunteers and is the director of the Altar Guild at her church.

Robert Ordway of Valparaiso is on the board of Zoning Appeals and the Town & Gown Committee and volunteers.

John Potts of Valparaiso, veteran, served in Vietnam, was a professor of law at VU, was a leader in Indiana’s pro-life movement and volunteers.

Robin Benson of Portage is host mom for the Gary Southshore RailCats baseball team members, is an avid runner and raised thousands of dollars in donations for the Leukemia and Lymphoma Society. Benson carried the Olympic Torch for the Salt Lake City 2002 Olympics.

Elizabeth Weber of Fishers is an RN, has been nominated for the Daisy Award for outstanding nursing care six times and volunteers.

Theodore Fitzgerald of Hebron, president and a director for numerous volunteer positions in Porter County, was a 1996 Olympic Torch Bearer and recently received the ROSE award for Professional of the Year.

Troy Williams of Portage is a former U.S Marine Sergeant, current chief of police for Portage and coaches youth sports.

Gail Tuminello of Valparaiso is the last living child of Orville and Corinne Redenbacher. Tuminello volunteers and is a board member for the Valparaiso Public Library.

Visit www.in.gov/ibc/files/PorterCo.pdf to see the torch route in Porter County.