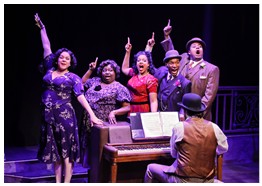 **** Highly Recommended **** Porchlight Music Theatre’s remount of their 2014 hit, “Ain’t Misbehavin’” is a guaranteed good time.  An incredibly talented cast, with Austin Cook’s hot piano, makes for a toe-tapping revue celebrating the music of Fats Waller.  “Ain’t Misbehavin’” is smooth, sexy and polished.  I give it 4 Spotlights.

Starting off with title song, “Ain’t Misbehavin’”, the talented cast – Robin DaSilva, Sharriese Hamilton, Donterrio Johnson, Lorenzo Rush, Jr. and Lina Wass – all blessed with rich, full voices – perform 29 of Fats Waller’s biggest hits.  They don’t just sing, they dance, too.  They’re all good dancers, but Lorenzo Rush, Jr. gets a special mention.  For a large man, he can really move!  And there might be some hanky-panky going on – maybe a certain man is ignoring his woman and going after a flirty younger woman.

There’s a very sultry “Honeysuckle Rose” and a fast moving number, “The Joint Is Jumpin’”.  I loved the high-hat movement in “Lounging at the Waldorf”.  Donterrio Johnson absolutely slinks around the stage with “The Viper’s Drag”.

The show winds up with a medley which includes songs like “I’m Gonna Sit Right Down and Write Myself a Letter”, “Two Sleepy People”, “I’ve Got My Fingers Crossed”, “I Can’t Give You Anything but Love” and “It’s a Sin to Tell a Lie”.  A biographical note – I can remember my mother singing at least three of those songs when I was small.

Fats Waller’s first songs, “Muscle Shoals Blues” and “Birmingham Blues” – which were not included in this revue – were recorded in 1922 when he was just eighteen years old.  He started recording with Victor Records in 1926.  His songs were mega-hits during his lifetime; today many have moved into the lexicon of classics.

I have to say that Austin Cook was amazing on the piano.   During a solo, his hands were flying across the keys, his body was moving, his feet and legs in constant motion.  In fact, all of the musicians – Bryant Millet on trumpet, Corbin Andrick on saxophone, Dan Kristan on bass and Michael Weatherspoon on drums – were amazing.