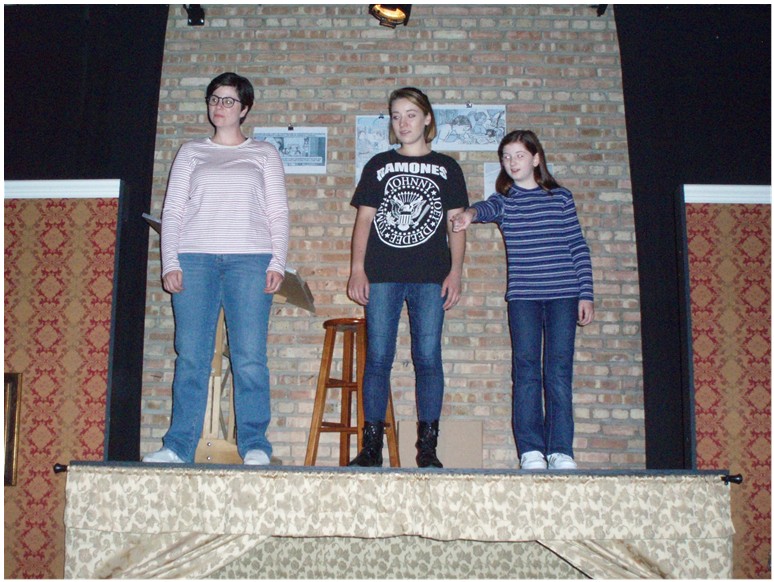 **** Recommended **** I really enjoyed the Towle Theater’s production of “Fun Home”, based on Alison Bechdel’s best-selling graphic memoir of the same name. It works well on the smaller stage, making the story more intimate. I wish that young Alison’s voice wasn’t drowned out by the music, but otherwise it was very well done. 3 ½ Spotlights

“Fun Home” is not a big Broadway show filled with production numbers. It actually is a bittersweet little play which happens to have music intrinsic to the story. By the way, ‘fun home’ is an inside joke referring to the family funeral home, not an amusement park fun house!

A huge hit on Broadway, “Fun Home has three variations of Alison wandering around the stage. According to Alison (Meghan Hoyt), her entire history can be summed up by saying she’s gay; oh, and by the way, her gay father killed himself by walking in front of a semi.

Small Alison (Stella Hoyt) and her brothers, Christian (Jackson Lopez) and John (Derek Diehl), love to run wild in the funeral home. After their father, Bruce (Gino Generelli), shows a potential customer out, he scolds them for playing in the coffins. When he leaves the room, they go back to ‘filming’ their commercial, “Come to the Fun Home”, a highlight of the show.

Everything in the Bechdel home revolves around Bruce, who is proud to tell guests that he restored their historic home all by himself. In addition to running the funeral home, he’s a high school English teacher. He thinks of himself as avant-garde and hip, but he’s really passive-aggressive and pedantic.

Angst-ridden college student Medium Alison (Nicole Baker) is trying to figure out her sexual orientation when she meets Joan (Rebecca Buechel), who is sure of hers. When she figures it all out, she comes out in a letter to her parents, which they don’t hurry to answer. In a call home, her mother vents a lot of her anger about Bruce’s risky behavior.

“Fun Home” is not suitable for younger audiences. Some things just shouldn’t appear on a child’s lexicon. Bruce’s suicide, which is unseen, is horrible to contemplate. In another scene, Alison confronts her mother, Helen (Heather Clark), about her father’s behavior. Helen tells her that he’s been having affairs with men throughout their entire marriage, and that one time he even came home with body lice.

“Fun Home” runs through July 29th at the Towle Theater, 5205 Hohman Avenue, Hammond. Free parking is available in the lot behind the theater. Enter through the alley door. Running time is 90 minutes, no intermission. Performances are Friday and Saturday at 8:00 pm; Sunday at 2:00 pm. Tickets are $19. FYI (219) 037-8780 or www.towletheater.org.