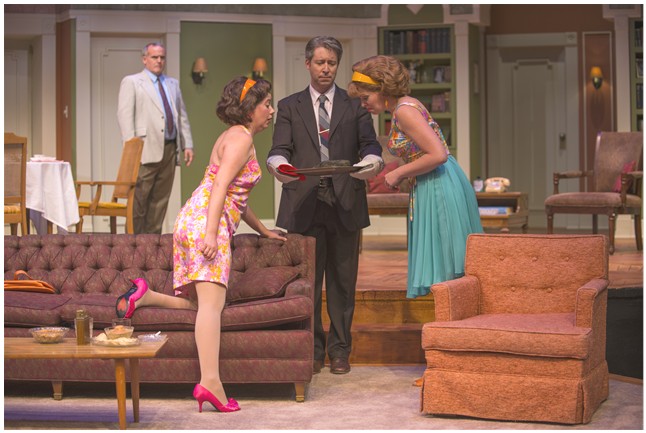 Theatre at the Center’s “The Odd Couple” is a Blast!

**** Highly Recommended **** Theatre at the Center’s production of “The Odd Couple” is a laugh riot. Even though the jokes are old, they still work, and work well, if all the guffaws from the audience were any indication. To paraphrase TATC General Manager Richard Friedman, Norm Boucher was born to play Oscar Madison! Hurry and get your tickets, you won’t want to miss it. I give “The Odd Couple” 4 Spotlights.
George Keating joins Boucher as his best friend, Felix Unger. One of my friends thought that Keating’s Felix Unger wasn’t neurotic enough, but I have to disagree. I think it just took a little time to warm up to his Felix, who was annoyingly OCD. He certainly had all of Felix’s ailments and mannerisms. My favorite – when he cleared his ears (a unique Felix mannerism) with a roaring mmmm sound, he cracked me up. It takes a certain amount of courage on the part of an actor to choose not to play someone else playing a part (especially a signature role made by a famous someone), and to make that part his own.
No matter how many times I’ve seen “The Odd Couple, the interaction between the guys in the poker game always draws me in. Murray the Cop (Bret Tuomi), Vinnie (Geoff Rice), Speed (Ray Andrechek), and Roy (Larry Adams) are mostly oblivious to the ‘drama-dies’ going on around them! They’re all secretly envious of newly divorced Oscar and his wifeless life-style – except they’re all pretty suspicious of the ‘green’ sandwiches.
When Felix’s marriage falls apart, Oscar invites to him move in – but they’re like oil and water. Oscar is a slob, while Felix is a neat freak. Oscar believes in live and let live, while Felix is a master at passive-aggressive guilt trips. One of the biggest laughs of the night – Oscar’s recounting of how hard it was to figure out that those two ‘insulting’ letters at the end of a note were actually Felix’s initials.
When Oscar arranges a double date with the giggling Pigeon sisters, Gwendolyn (Colette Todd) and Cecily (Jocelyn Adamski), Felix calls his almost ex-wife for her recipe for London Broil. When Oscar gets home late, Felix throws a pouting hissy fit better than the hissy fits thrown by most teen-aged girls!
Angela Weber Miller’s set is a dream. It’s a simple apartment and yet amazingly complex in its design. There’s even a visible toilet behind the bathroom door.
“The Odd Couple” runs through August 14th at Theatre at the Center, 1040 Ridge Road, Munster. Running time is 2 hours, 15 minutes, with an intermission. Performances are Thursdays and Fridays at 2:00 pm; Fridays and Saturdays at 7:30 pm; and Sundays at 2:30 pm. There are additional evening performances on select Thursdays and Sundays as well as Saturday matinees. Tickets range from $40-$44. Parking is free. FYI (219) 836-3255 or www.theatreatthecenter.com.