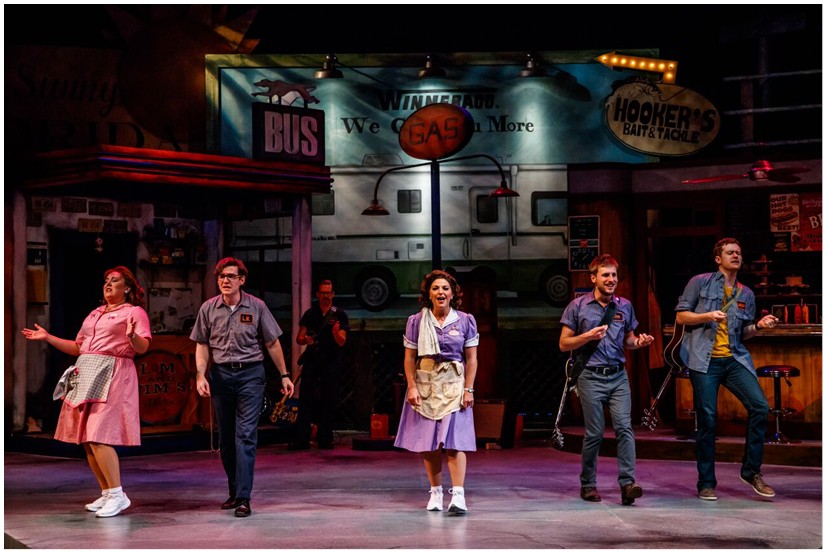 **** Recommended **** I’m not a fan of country music, but “Pump Boys and Dinettes”, a toe-tappin’, feel-good little musical, has always been one of my favorite musicals.  Since it closed in the late ‘80s, “Pump Boys and Dinettes” has rarely been seen on Chicago stages (Theo Ubique in 2011, Drury Lane in 2009), and I just can’t figure out why.  It’s an ideal show for a smaller theater and a guaranteed audience pleaser.  If you’re looking for a good time, you’ll want to drive on down to Theatre at the Center (Munster) for a performance.  I give “Pump Boys and Dinettes” 4 Spotlights.

On “Highway 57”, somewhere between Frog Level and Smyrna, the “Pump Boys” are pumping gas.  Jim (Shaun Whitley) and L.M. (Matt Edmonds) own the garage, Jackson (Matt Holzfeind) and Eddie (Cody Stragia) work for them.  Right next door, Rhetta (Christine Mild) and her sister, Prudie Cupp (Veroncia Garza), the “Dinettes”, are serving pie and coffee at the Double Cupp.

“Pump Boys and Dinettes” could be problematic to cast because it requires four musicians who can both sing and act.  I’m happy to say that Theatre at the Center found four really talented guys.  Whitley is on lead guitar, Edmonds plays piano and accordion, Holzfeind plays rhythm guitar and harmonica, while Burke plays guitar and bass.  The Dinettes are always ready to grab a tambourine, a pair of spoons or some other kitchen instrument and play along.  Although there’s not much of story line, the songs give us a glimpse into their lives.

Prudie is sweet on LM, but he seems to be oblivious.  Jim is dating Rhetta, but she’s mad at him because he skipped a date.  His justification – he got his fishing license in the mail.  If you’ve ever fished – or lived with someone who likes to fish – you’ll enjoy the “Fisherman’s Prayer” and “Catfish”.  Jim gets nostalgic about his grandmother, who was the best at cooking his fish, in a song called “Mamaw”.  Rhetta warns Jim to “Be Good or Be Gone”.  At quitting time, they all put on their “Drinking Shoes”.

One day, L.M., who never comes out of his office, left on a mysterious trip.  When he came back, he was in a daze, singing “T.N.D.P.W.A.M.” (The Night Dolly Parton Was Almost Mine).  The audience loved the “Dinettes” song about “Tips”.

The Pump Boys have had an Uncle’s Winnebago up on blocks for months while they “worked” on it.  The day they decided they needed a vacation, however, – “I Need A Vacation” – the Winnebago was ready to go.  L.M. and the Dinettes enjoyed the warm Florida sun, singing “Farmer Tan”.

If some regional company were to cast a production of “On Your Feet”, they should cast Christine Mild as Gloria Esteban.  It’s uncanny how much she looks like Esteban, and she’s a bundle of constantly moving energy, too.

Kudos to Scenic Designer Angela Weber Miller who brought a country garage and old-fashioned diner to life.  A pair of giant Coffee Cups revolve over the Double Cupp, which even has a stack of pies on the counter.  The garage, which has an illuminated sign as well as a smaller sign advertising “Gas”, has a car repair equipment, a rack of tires, an air hose and a piano – yeah, every garage needs a piano!