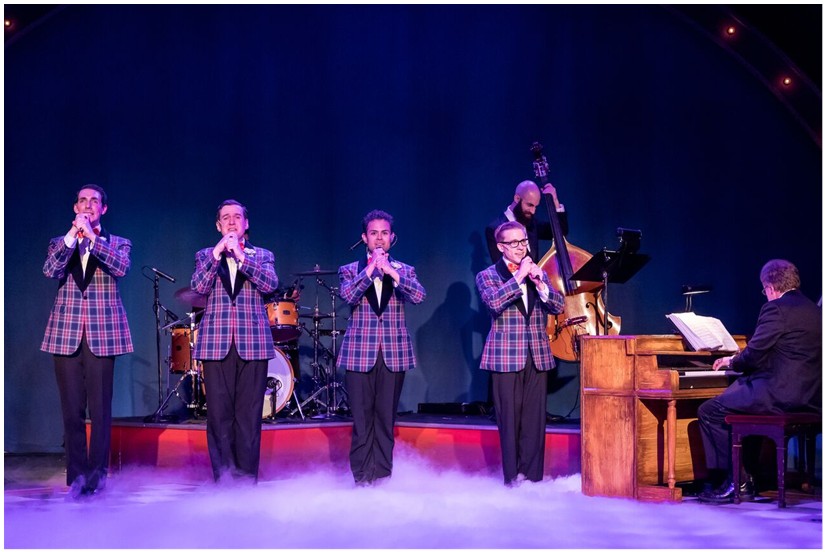 **** Highly Recommended **** Theatre at the Center’s “Forever Plaid” is a sweet, funny, feel-good treat for everyone in the family. “Forever Plaid” is a musical revue about a quirky quartet of good-looking guys who sing a slew of golden oldies in harmonies straight out of the ‘50s. Get your tickets for this must-see today! 4 Spotlights
The Plaids were rehearsing their final number as they drove to their very first paying gig when their car was broadsided by a bus. To add insult to injury, the bus was full of Catholic schoolgirls on their way to see the Beatles on the Ed Sullivan Show. The girls were all OK, the Plaids were not.
By the way, if you thought you recognized the narrator’s distinctive voice, you’re right, you did! It’s former CBS newsman, Bill Kurtis.
A long, long time later, the Plaids found themselves on a stage, with microphones and musicians, but they don’t know why they’re there, because, of course, they’re dead. They’re bewildered to notice that they’re wearing white dinner jackets with red rose boutonnieres. After a couple of helpful thunder claps, they figure it out – they’re back to sing their concert!
When they rehearsed, the Plaids, Sparky (Matt Edmonds, Francis (Adam LaSalle), Jinx (Yando Lopez) and Smudge (Christopher Ratliff), imitated famous ‘guy’ groups of the ‘50s like the Four Aces, the Four Lads, the Four Freshmen, the Crew Cuts and more. Their first song, “Three Coins in the Fountain” was sung by Frank Sinatra in the film of the same name, then recorded by the Four Aces.
When the Plaids introduce the musicians, they say that Jake Saleh (Bass) and Nick Anderson (Drums) are cousins. The guy on the piano, Bill Underwood, came with the venue!
“Forever Plaid” includes ‘50s hits like “Moments to Remember”, “No Not Much”, “Perfidia”, “Catch a Falling Star”, “Lady of Spain” and Plaid finale, “Love is a Many Splendored Thing”.
Novelty numbers:
• Christopher Ratliffe sang a mash-up of “Sixteen Tons”/”Chain Gang”
• They don straw hats, as Jinx drops one on Bill Underwood’s head, for “Caribbean Plaid”, a medley including “Day-O”, “Kingston Market”, Jamaica Farewell” and “Matilda Matilda”
• A volunteer from the audience joins Matt Edmonds at the piano as he plays “Heart and Soul” while the Plaids sing
• The Plaids sampler for private functions included “The Bride Cuts the Cake’, “Italian Wedding”, “Anniversary Waltz”, “Hava Nagila” and more
• During a snowstorm, they actually sang “Catch A Falling Star” for Perry Como
• the Plaids recreate the entire Ed Sullivan show – with acts as diverse as the Rockettes, performing seals, The Vienna Boys Choir, the Chipmunks and the fat lady singing.
“Forever Plaid” runs through June 3rd at Theatre at the Center, Center for the Visual and Performing Arts, 1040 Ridge Road, Munster. Parking is free. Running time is 2 hours with an intermission. Performances are Wednesday and Thursday at 2:00 pm; Friday at 7:30 pm; Saturday at 3:00 and 7:30 pm; Sundays at 2:30 pm; with select Thursday and Sunday night performances. Tickets range from $42-$46. FYI (219) 836-3255 or www.theatreatthecenter.com.