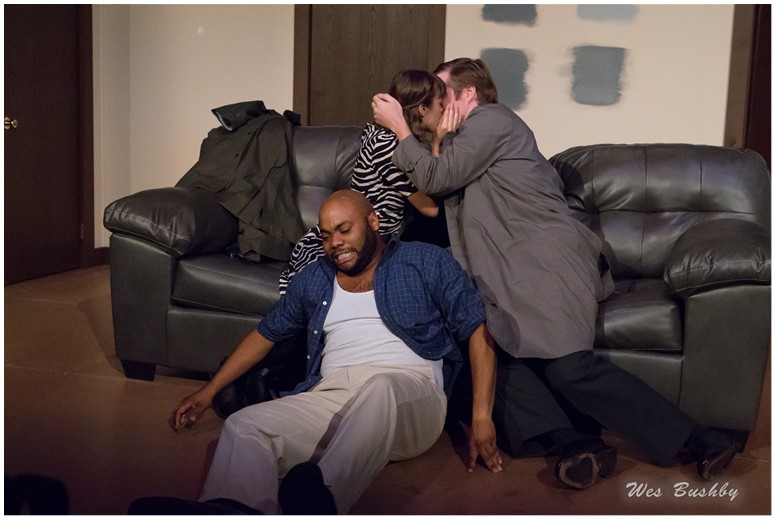 The Towle’s “Cockeyed” was a Charming Rom-Com

**** Recommended **** Towle Theater’s production of “Cockeyed” was a charming rom-com (romantic comedy) about unrequited love, philosophy majors, and the guy in the office nobody ever notices. By the way, that guy, Phil (Khyel Sherman Roberson), is so darn cute you’ll want to take him home! Kudos to Co-Directors, Jeff Casey and Suzanne Nyhan, for another terrific show. 3 ½ Spotlights

The only job Phil, a Philosophy major in college, could find after graduation is as an assistant in the Accounting Department, where he’s been invisible ever since. He’s suffering from a case of unrequited love for Sophia (Kelsey Tuma), the boss’s assistant. Sighing, he lurks around the corner watching while she makes coffee.

Phil’s boss, Norman (Zach Hebert), warns him to stay away from Sophia, since VP Marley (Chris Lysy) is dating her. When he won’t stop mooning, Norman introduces them but Sophia still doesn’t see Phil. In fact, she gets really upset with Norman because she thought he was making fun of her by introducing her to the coffeepot.

By the way, Phil frequently talks directly to the audience, starting out every time by saying, “I know what you’re probably thinking,” then going on to rationalize whatever outrageous thing he’s planning to do next. Phil’s also really good at finding a quote from one major philosopher or another to justify whatever he wants to do – and he always prefaces the quote with the philosopher’s years (i.e. Immanuel Kant, 1724-1804). Phil loves disco in general and the Bee Gees music in particular.

Sophia has just moved into a new (to her) basement apartment with one main drawback – her mother lives in the same building, and calls her constantly. Since she can’t see him, Phil decides to go home with her. In fact, he spends the night – in Sophia’s bed, right between her and VP Marley!

Phil watches how badly VP Marley treats Sophia – like she’s his dog – and tries to figure out how to make her see how bad this slime-bucket is for her. Meanwhile, Norman figures out where Phil’s been spending his time. Before he can get Phil to leave, Marley catches him and threatens the worst.

Since it’s a rom-com, there is an HEA (happily ever after). I won’t share the ending, except to say that Sophia was a philosophy major too.

“Cockeyed” photos by Wesley Bushby. Next up at the Towle: “Plaid Tidings”