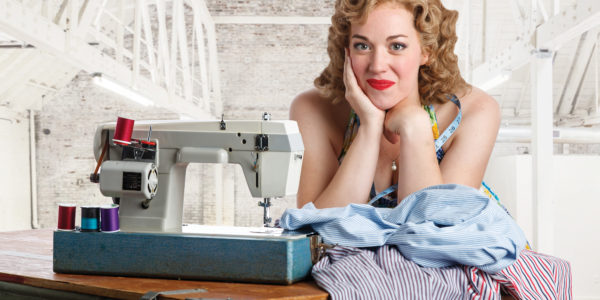 The Pajama Game coming To Theatre at the Center

Theatre at the Center Artistic Director Linda Fortunato has cast Curtis Bannister as Sid, Elizabeth Telford as Babe, Cynthia Carter as Mabel, Kelly Felthous as Gladys, Jason Grimm as Hines, Dan Klarer as Prez, Rick Rapp as Pop and Steve Silver as Mr. Hasler in the musical comedy romance The Pajama Game. Rounding out the cast of talented performers are Matt Casey, Andrew MacNaughton, Maggie Malaney, Thomas Ortiz, Sierra Schnack, Aalon Smith, and swings Shannon McEldowney and Shea Pender. Fortunato will direct, Christopher Chase Carter is the choreographer and William Underwood is the music director. Previews begin September 12 with an Opening Night on September 15 and a continued run through October 13.
The Pajama Game is a musical based on the 1953 novel 7 ½ Cents by Richard Bissell that opened on Broadway in 1954 with music and lyrics by Richard Adler and Jerry Ross and book by George Abbott and Richard Bissell. The Tony Award winner also inspired the 1957 film starring Doris Day with songs such as “Steam Heat,” “Hey There” and “Hernando’s Hideaway.” The musical comedy takes place in the Sleep-Tite pajama factory where workers demand a 7 ½ cent raise with both sides unwilling to budge. When the head of the union grievance committee meets her new supervisor, love changes the game.
Curtis Bannister (Sid Sorokin), making his debut at TATC, is described by Time-Out magazine as “radiating with slowly simmering energy.” Bannister is known for his television role as firefighter Reimers on NBC’s Chicago Fire. He has also been seen as the Celebrant in Bernstein’s Mass, directed by Kevin Newbury and filmed for PBS’s Great Performances. Previous 2019 stage performances include his debut with the St. Petersburg Opera as Paul in Kiss Me, Kate.
Elizabeth Telford (Babe) returns to TATC where she last appeared as Miss Grace Farrell in Annie Warbucks. Regionally, she has performed with the Old Globe Theatre, Milwaukee Repertory Theatre, Skylight Music Theatre, First Stage Theatre, and the Utah Shakespeare Festival.
Cynthia F. Carter (Mabel) is making her debut at TATC. Previous works include Mahalia Jackson Moving through the Light and Woman of Soul, both at Black Ensemble Theater, The Nativity at Congo Square Theater Company, Tangled at ETA Creative Arts Theater and Crowns at Chicago State University.
Kelly Felthous (Gladys) returns to TATC after making her debut earlier this year as Ruby in Dames at Sea. Chicago credits include Zaneeta in The Music Man at The Goodman Theatre, Roxie Hart in Chicago The Musical (Jeff nomination) and Audrey in Little Shop of Horrors at Drury Lane, Sally Bowles in Cabaret at the Paramount Theatre and Gertrude in Seussical at the Marriott. New York credits include the original companies of Trip of Love and Max and Ruby. National tours include Wicked and Grease.
Jason Grimm (Hines) is making his debut at TATC.  His Chicago credits include The Suspects in Murder for Two (Jeff Award), How to Succeed in Business Without Really Trying, and Singin’ in the Rain at the Marriott Theatre and Ebenezer Scrooge in Q Brothers Christmas Carol at Chicago Shakespeare Theatre.
Performances are 2 p.m. Wednesdays and Thursdays; 7:30 p.m. Fridays; 3 p.m. and 7:30 p.m. Saturdays; and 2:30 p.m. on Sundays. Individual ticket prices range from $42 – $46. To purchase individual tickets, call the Box Office at 219-836-3255. For more information on Theatre at the Center, visit www.TheatreAtTheCenter.com.