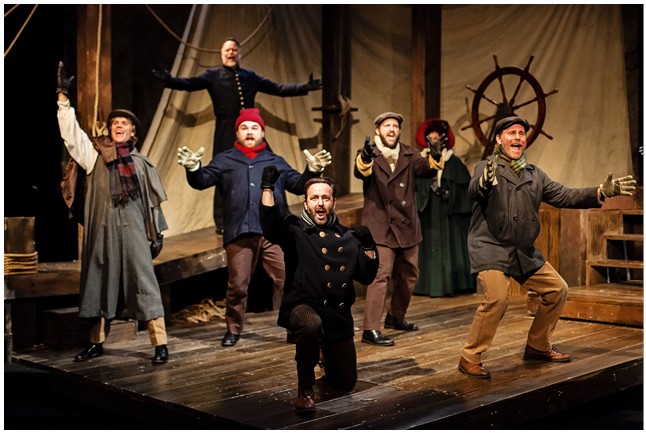 “The Christmas Schooner”, Chicago’s Own Musical is a Must-See at the Mercury Theatre

Late in the nineteenth century, brave sailors risked life and limb on the icy waters of Lake Michigan in November to bring Christmas trees to German immigrants living in Chicago.  John Reeger and Julie Shannon pay tribute to their heroic stories in “The Christmas Schooner”.

Captain Peter Stossel (Stef Tovar) has a good life and thriving business in Manistique, Michigan.  He lives with his wife, Alma (Brianna Borger), his 9 year-old son Karl (Peyton Owen), and his father, Gustav (James Wilson Sherman).  The Stossels honor a lovely German tradition at Christmas dinner when Alma passes a branch of fir to family and friends at the table, while singing a song called “The Blessings of the Branch.”  At the end of each performance, the cast shares that touching tradition with the audience.

One Christmas, Peter received a letter from his cousin Martha (Elizabeth Lanza) telling him of her yearning for a Christmas tree, a part of their German tradition.  Since his land is covered with fir trees which need to be thinned out, he decides he could harvest some trees and sell them in Chicago.

The following November, over Alma’s protests, Captain Stossel, his father Gustav and a small crew – Rudy (Daniel Smeriglio), Oskar (Matthew W. Miles), and Steve (James Rank) – sailed down the lake toward Chicago with a load of trees, not knowing if they’d sell any of them.  When the schooner arrived at the Clark Street dock, they were surprised to find a huge crowd waiting for them.  They sold all the trees in just one day.

Captain Stossel continued bringing Christmas trees to Chicago until the year his son Karl (Christian Libonti) turned 15.  That year, Gustav broke his arm, so over Alma’s objections, Karl joined the crew.  In a terrible winter storm, Captain Stossel held the wheel until the crew got into the lifeboat, but lost his life.  After the trees floated to shore, they were loaded onto another ship, which took them on to Chicago.

Chicago’s own Christmas story, “The Christmas Schooner” had a 12 year run at the old Bailiwick Theatre, as well as a 2009 production at Theatre at the Center.  This is Mercury Theatre’s fifth production; Jim Sherman has appeared in all of them.

By the way, playwright John Reeger has a new musical whodunit, “The Man Who Murdered Sherlock Holmes” opening January 20th, also at the Mercury.