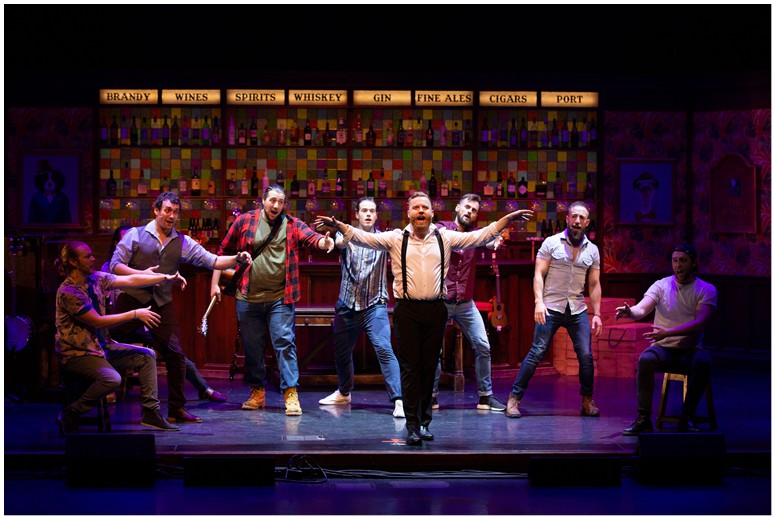 **** Highly Recommended **** When I walked into Broadway Playhouse and saw all the people gathered around an onstage bar, it was like déjà vu, flashing me back to the opening of “Once”. The cute guy taking selfies of the himself and the audience, not to mention the other eight good-looking guys roaming the stage, quickly dispelled that illusion. When the stage cleared and the guys started singing in nine-part harmony, I knew we were in for something special! “The Choir of Man” is one of the best shows I’ve seen in ages! 4 BIG Spotlights

All over Ireland, people gather in their local pub. The pub is more than a drinking establishment, I think every pub we visited was a warm, friendly place where we heard the very best Celtic music. For me, “The Choir of Man”, set in a pub called The Jungle, was more than a show, it was a reminder of a wonderful trip.

Nine young men, from across the British Isles, make up The Choir of Man. They are:
• Joker (Aidan Banyard, Buckinghamshire, England), the cute selfie guy who also played banjo and ukulele;
• Bore (Andrew Bateup, Wadhurst, England) who sang an incredible rendition of “Dream the Impossible Dream”;
• Hardman (Tom Brandon, Rostrevor, Ireland), strength and performance coach by day, singer by night;
• Tapper (Matt Cox, London) whose fabulous tap dance started while he was sitting at a table, tapped his way across the stage to Paul Simon’s “50 Ways to Leave Your Lover”
• Piano Man (Connor Going, Glasgow, Scotland) played a lot of the piano accompaniment, but also disappeared late in the show, only to reappear wearing a kilt and playing a set of bagpipes
• Narrator (Denis Grindel, Donegal, Ireland); like many a charming Irishman, he has the gift of gab. He told us about the culture of the pub and about the disappearing pub – falling victim to urban renewal. His patter set the mood, as well as setting up many of the songs and introducing all the guys.
• Beast (Peter Lawrence, Scotland), guitar/flute player who serenaded my friend Annette Dixon
• Barman (Mark Loveday, London) who always has his hand on the tap handle
• Casanova (John Sheehy, Cork, Ireland) who challenges another audience member into building a pyramid out of coasters

Like the pub entertainment I remember from Ireland, the songs performed by the Choir of Man were eclectic, ranging from Celtic harmonies to Adele, from Broadway hits to Guns ‘N’ Roses. All of the guys played musical instruments. In addition to the piano, a couple of guitars and a variety of makeshift drums, I saw a banjo, ukulele, fiddle, flute, accordion, a bodhran (traditional Irish drum) and a cymbal. I wish they’d accompanied every song, but unfortunately many had background tracks.

I heard songs like “Chandelier”, “Under the Bridge” and “Some Nights”. Their rendition of “Escape (the Pina Colada song)”, with a lot of wiggling butts, was hilarious. Another song, “Waterloo Sunset”, moved me almost to tears. They closed the show with a moving and traditional Irish song, “The Parting Glass”, which ends with the phrase, “Good night and joy be with you all”.