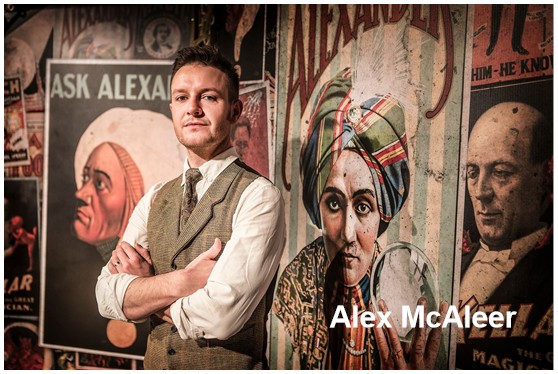 The Amazing “Champions of Magic” – Review by Carol Moore

**** Recommended **** Champions of Magic is an amazing show! Several of the award-winning stars have appeared on the CW’s “Penn and Teller: Fool Us. The five are: illusionists, Young and Strange; mind reader, Alex McAleer; escape artist, Fernando Velasquez; and close-up magician extraordinaire, Kayla Drescher. I was in awe watching them perform. The show includes plenty of audience participation, too. Hurry and get your tickets for this family friendly spectacle. 4 Holiday Spotlights

Although all five have individual specialties, they are also proficient in standard magic tricks. In fact, in Act I they sit in a row and explain how and when they became interested in magic. Along with that explanation, they each do the very first trick they learned. Then, in Act II, they asked someone in the audience to sign a $20 bill, then each of them did a different trick using that bill before returning it to its owner.

Since I don’t want to be a spoiler, I’m only mentioning one part of each act:
• Alex McAleer reads people’s minds – literally. I know there’s a trick of some kind there, but I sure couldn’t figure it out. He guessed what people were thinking – on stage and out in the audience. His volunteers were the people who caught the ‘champ-enzie’ he threw into the audience.
• Kayla Drescher is an absolute master with cards. Since her work is with cards, a camera close-up was projected on a big screen so everyone could see. After a random guy in the audience shuffled a deck of cards, she fanned them out on a table (the way a casino dealer would). She looked at them once, closed up the deck, then picked a number, specified the card (by number and suit) then pulled out that very card.
• Fernando Velasco did several escapes, including an edge-of-your-seat escape from a snapping mechanism covered in fire. In Act II, he recreated at least two of Harry Houdini’s most famous escapes. Enough said!
• Young and Strange recreated a Las Vegas act from 1989, complete with a beautiful assistant in a sparkly costume – who also did an aerial routine on the ribbons – a disco ball and a sort-of tiger.

The show ends with a spectacular display of pyrotechnics, flying gold glitter, confetti cannons and gasps of awe from the audiences.

“Champions of Magic” runs through December 29th at the Harris Theater for Music and Dance, 205 E. Randolph, Chicago. Parking in the Millennium Garage for $19 with a validation.