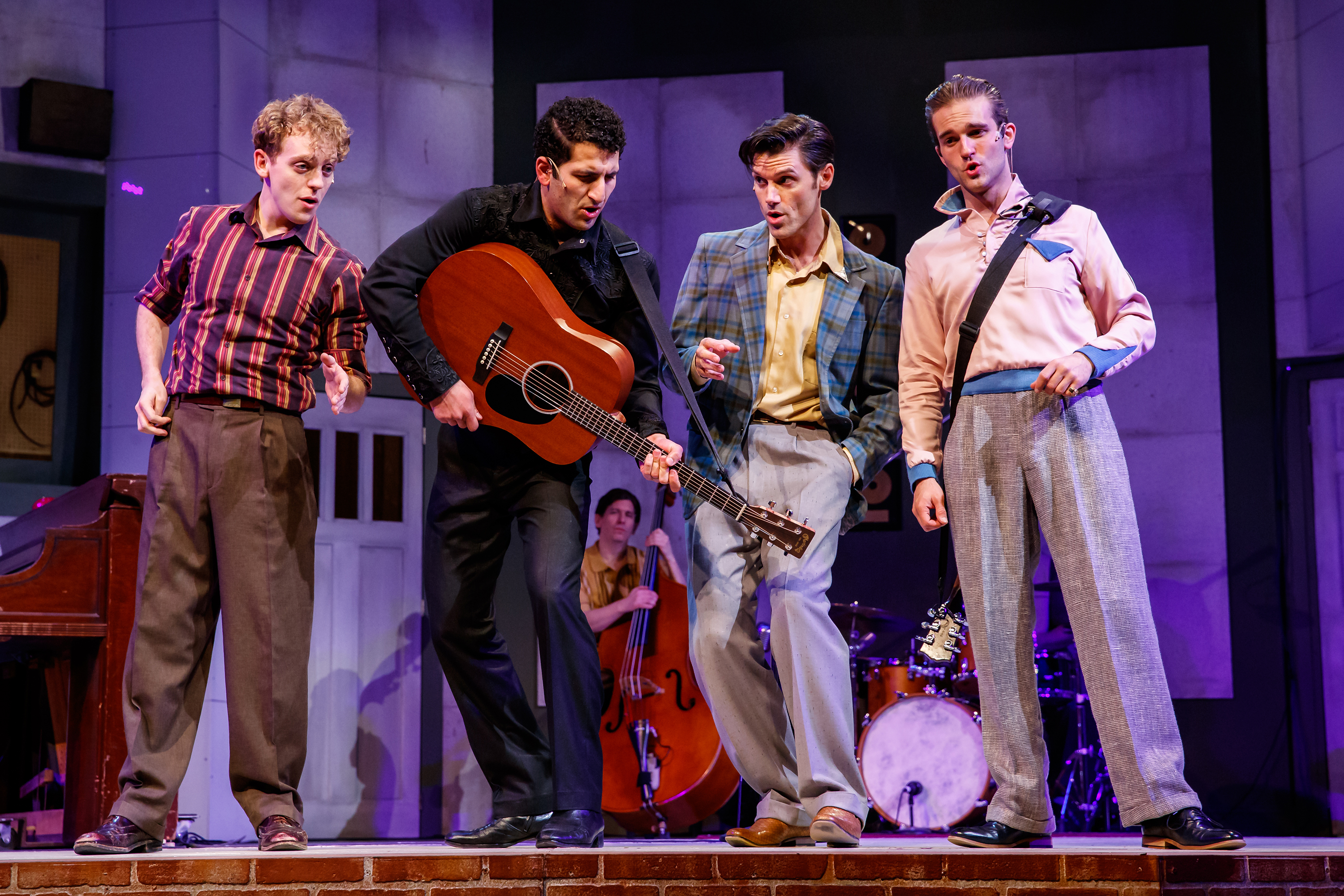 **** Highly Recommended **** Theatre at the Center’s “Million Dollar Quartet” will have you dancing in your seat! On December 4, 1956, Johnny Cash (Tommy Malouf), Jerry Lee Lewis (Michael Kurowski), Carl Perkins (Zachary Stevenson) and Elvis Presley (Zach Sorrow) did a little jammin’ at Sun Records Studio in Memphis on December 4, 1956. “Million Dollar Quartet” is based on the events of that night. Rock and roll lovers, get your tickets now! This show might be the best I’ve seen. 4 BIG Spotlights

I think the thing that sets this production apart is Sean Fortunato’s interpretation of Sam Phillips. Although Phillips owned Sun Records – and discovered the quartet – he’s usually a one-dimensional character, with the spotlight on the singers. Director Darryl Brooks puts a slightly different spin on things, bringing Phillips into the spotlight – literally.

While the guys will still play that great rock and roll, I agree that the emphasis should be on Phillips. After all, Sun Records was his baby and these were his boys! So, when he tells the audience stories about his business or his boys, he steps out of the studio and down a step into the spotlight. As for Fortunato’s interpretation, he gives Phillips depth and dimension – and a Memphis accent. He told me he listened to hours of taped interviews to get Phillips’ rolling drawl down pat.

On December 4th, Phillips had just signed Jerry Lee Lewis, who was eager to show off his talent to anyone who’d listen. While Perkins was working on a song called “Matchbox”, Phillips decided the song needed piano backup and brought in Jerry Lee. Needless to say, the arrogant and very abrasive Lewis rubbed Perkins the wrong way.

Meanwhile, Elvis Presley and his girlfriend, Dyanne (Aeriel Williams) dropped in for a visit because Elvis wanted to persuade Phillips to come to RCA and manage his career. Phillips was waiting for Johnny Cash to sign a new contract so he planned a little celebration. When the guys started jamming, Phillips decided to record the meeting.

“Million Dollar Quartet” has great country, rockabilly and gospel music. In addition to singing songs like “Blue Suede Shoes”, “Brown Eyed Handsome Man” and “Down by the Riverside” as a quartet, they each sing the lead in many of their individual hits.

In addition to “Matchbox”, Perkins leads in “Who Do You Love” and “My Babe”. Johnny Cash sings in “Folsom Prison Blues”, “Sixteen Tons” and “I Walk the Line”. Elvis Presley, who was already a star, sang “Long Tall Sally”, “Peace in the Valley” and “Party”. Although he was brand new, Jerry Lee Lewis rocked the house with “Great Balls of Fire”. Even Dyanne got in the act, singing Peggy Lee’s hit, “Fever”, as well as “I Hear You Knockin’”.

After everyone takes a quick bow, there’s a mini-concert with Elvis Presley singing “Hound Dog”, Johnny Cash singing “Ghost Riders in the Sky”, Carl Perkins leading the audience in a sing-along with “See You Later, Alligator” and finally, the Jerry Lee Lewis hit, “Whole Lotta Shakin’ Goin’ On”.

I can’t say enough about the musicality of this production. All four guys are incredible musicians – and they have great voices! Zachary Stevenson is a dynamite guitar player – and he has Carl Perkins’ dance moves down pat. Tommy Malouf has Johnny Cash’s deep voice and he can really strum that guitar. While Zach Sorrow is playing his guitar, he’s in constant motion just like the early Elvis – and he has that lip thing going on too! Michael Kurowski has an incredible amount of energy. He bounced all over the stage. Jerry Lee Lewis was famous for playing upside down, backward, standing, sitting, and so on, and Kurowski had them all!

I’ve seen/heard Aeriel Williams at both Black Ensemble Theatre and Porchlight Music Theatre and she was fabulous. I’m glad TATC audiences are getting to hear her amazing voice. The singers are backed up by Brother Jay (Michael Sinclair) on bass and Fluke (Nick Anderson) on drums. The narrator who introduces the show was Bill Kurtis.

“Million Dollar Quartet” runs through March 31st at Theatre at the Center, 1040 Ridge Road, Munster.
Parking is free.
Running time is just under two hours with an intermission.
Performances are Wednesday and Thursday at 2:00 pm; Friday at 7:30 pm; Saturday at 3:00 and 7:30 pm; Sundays at 2:30 pm; with select Thursday and Sunday night performances.