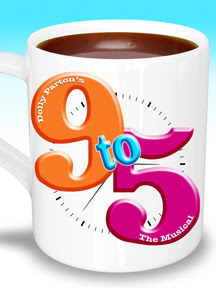 By Gayle Faulkner Kosalko
It’s 1979 just before the whole corporate greed and money is power scene of the 1980″s. Three women finally realize their importance, significance and strength in not only their personal lives, but also in the workplace.  The musical opens Saturday, November 2.

Directors Bette Diaz and DJ Halicky and a cast of 20 plus bring this story to life at the Marian Theatre Guild in November.

“What’s challenging is the pace of the show itself,” DJ explained.  “It moves incredibly fast like a locomotive.”

Remember the fashion of the late 1970’s?  That’s part of the fun as well as the dancing that’s all part of this late 70’s.

“Doing the dancing is probably the hardest thing for the cast from the way it was back then.” he said. “But they are an outstanding cast and have been from the word go.”

And as entertaining as it is as a piece from another decade, the directors point out that things haven’t really changed so much in the last 30+ years.

“The topics are still relevant to today’s events,”  Betty said.   “From the Me Too era now to being a single working mother, harassment in the workplace and even the pay gap between the sexes, things haven’t changed that much.”

But it’s the three women’s hilarious and very clever response to all those things that make “9 to 5 the Musical” you’ll truly enjoy!

Prices are $16 for adults and $14 for students/seniors.  A dinner theatre package is available for Saturday evening performances (reservations needed).  Call the Box Office (473-7555) for reservations