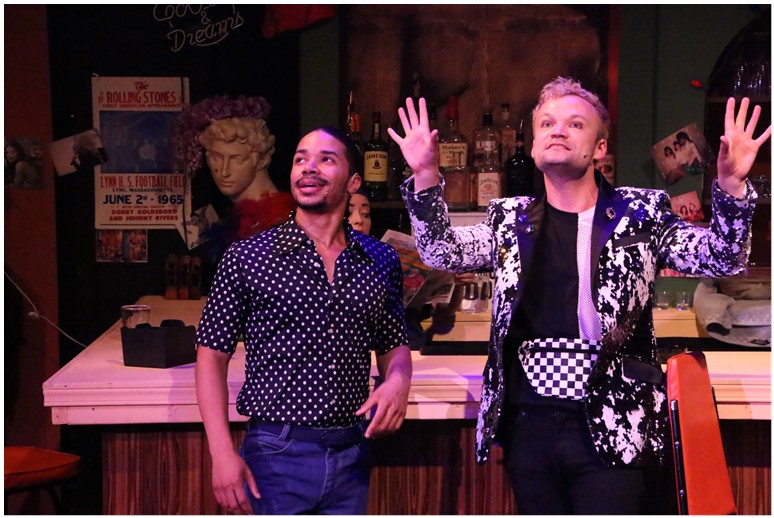 *** RECOMMENDED *** Not many people may remember the anti-gay massacre that occurred in New Orleans on June 24, 1973. The very popular LGBTQ bar, The UpStairs Lounge, was the location of a vicious and to-this-day unsolved arson attack that claimed the lives of 32 people. On the 40th anniversary of that tragedy the city of New Orleans finally recognized the victims and the atrocity was just beginning to be addressed openly. Subsequently, in 2015, Robert L. Camina’s documentary film “UpStairs Inferno” as well as journalist Clayton Deleny’s book “The UpStairs Lounge Arson” inspired two different playwrights to create their own versions of that fateful event. One of those works, Max Vernon’s “The View UpStairs,” is receiving its Chicago premiere by Circle Theatre at The Broadway at Pride Arts Center. 3 Spotlights

“The View UpStairs” runs through Sunday, July 22. Performances are Thursdays and Fridays at 8:00 PM; Saturdays at 2:30 PM and 8:00 PM; and Sundays at 2:30 PM. Mondays (Industry Performances) at 8:00 PM. Running time is 100 minutes, with no intermission. The Broadway, Pride Arts Center. 4139 North Broadway, Chicago. Tickets: $30.00. Monday Industry Nights $20.00. Tickets on sale now at www.circletheatrechicago.com