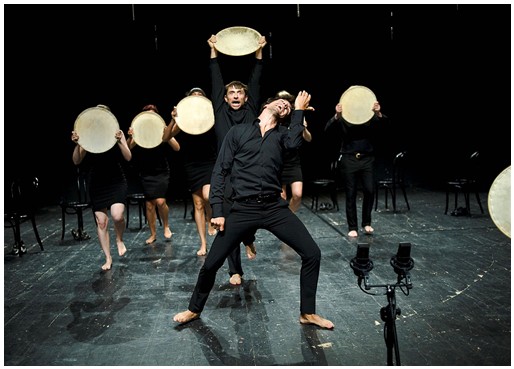 “Songs of Lear” was an Amazing Experience

***** Highly Recommended ***** I saw an amazing performance the other night Upstairs at Chicago Shakespeare Theatre, “Songs of Lear”, presented by a Polish company called Song of the Goat.  Although the CST website said “Songs of Lear” would be sung in multiple languages, I still had no idea what to expect.  What I heard were scenes from “King Lear” in the form of tone poems, only occasionally accompanied by a violin.  What I saw was a cast of ten expressing themselves through song, facial expressions and eloquent arm movements.  I’ve never heard anything better.  I give “Songs of Lear” 4 Spotlights.

“Songs of Lear” runs through September 18th in the Upstairs Theatre at Chicago Shakespeare Theatre, Navy Pier, Chicago. Running time is just over an hour, no intermission. Check the CST website for remaining performances. Tickets range from $48-$58. Parking is available at a 40% discount in the Navy Pier Garages with validation from CST. FYI (312) 595-5600 or www.chicagoshakes.com.