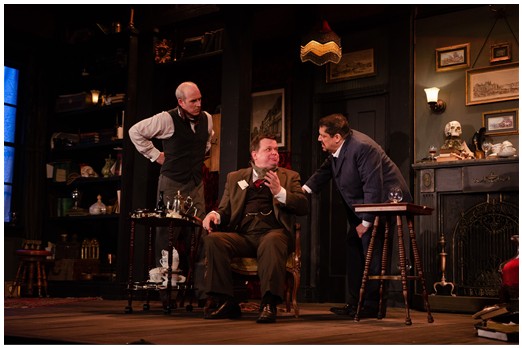 **** Recommended **** I’ve never been a fan of the whole Sherlock Holmes thing, so I wasn’t all that excited about seeing “Sherlock’s Last Case”. I think I’ve always been a bit turned off by all that arrogant know-it-all behavior, so needless to say, a play called “Sherlock’s Last Case” wasn’t on my bucket list. Describe me as surprised, “Sherlock’s Last Case” is a quirky little mystery with a serious cliff hanger at intermission. Sherlock is just as arrogant as always, but Watson brings him back to earth – at least for a little while. 4 Spotlights

As the story opens, Sherlock Holmes (Kevin McKillip) and his friend/sidekick/part-time patsy, Dr. Watson (Joe Foust), are having a cup of tea served by Mrs. Hudson (Belinda Bremner), Holmes’ landlady at 221 B Baker Street, London. Holmes is receiving death threats, which purport to be from the son of his arch-enemy, Moriarity.

It isn’t until Holmes received a visit from a beautiful young woman who gave her name as Liza Moriarity (Lydia Hiller), that he started to pay attention. Liza explained that she’d recently learned that she is the daughter of the afore-mentioned arch-enemy and that she has a half-brother. She’s there to warn Holmes that her brother is the person making threats against him. By the way, Hiller is absolutely effervescent as she tells her story.

Soon after she leaves, Mrs. Hudson hurries into the room, all a twitter. She’s received a letter informing her that a grandfather she never knew has died and she needs to go to Scotland for the funeral. Sherlock can’t see any reason why she should go, after all she never knew the man, but Watson backs her up.

In Mrs. Hudson’s absence, the dirty teacups pile up, the decanters of wine and whiskey remain empty, and there’s a general absence of nourishment, all of which frustrate Holmes to the point of belligerence. When Inspector Lestrade (René Ruelas) calls to discuss a case, he can’t even offer him a drink.

One day, Holmes gets a mysterious summons to a sinister abandoned church where he meets someone who really doesn’t like him. From this point on, the plot twists have plot twists, and saying more would ruin for you!