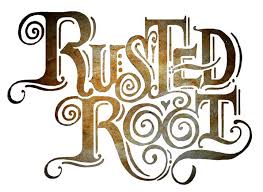 Having collaborated for two decades, Rusted Root has honed the perfect combination of musical intuition, freedom and virtuosity, which has allowed them to organically shape their music into it’s own distinct and undeniable vision. With eight albums under their belt, over three million records sold and countless nights on the road, Rusted Root transcends age, cultures and musical styles. Liz explains that the members of Rusted Root are drawn to and have explored virtually every form of music. “I am very inspired vocally by anything from Indian to African to Middle Eastern sounds and scales having grown up with a lot of Hebrew music” she says. Michael Glabicki cites the Bee Gees, Elvis Costello, Neil Young, Black Keys, Black Sabbath and various Afro Pop music as among his influences. The powerhouse ensemble’s hypnotic live performances have allowed them to tour alongside Santana, Dave Matthews Band, The Allman Brothers Band, Plant & Page and many others.

Now with the release of their latest album, The Movement, the journey continues. Rusted Root founder & front man, Michael Glabicki says, “The Movement is an extremely joyous recording with seriously deep undertones. It is a culmination of everything we have learned it is truly is a career record for us.” High Times states, “Thank goodness peace, love, and great grooves haven’t fallen out of fashion, because Rusted Root delivers all this and more with their seventh studio album, The Movement.”  The current tour lineup is Michael Glabicki (lead vocals, guitar), Liz Berlin (vocals, percussion), Patrick Norman (vocals, bass, percussion), Dirk Miller (guitar) & Zil (drums).