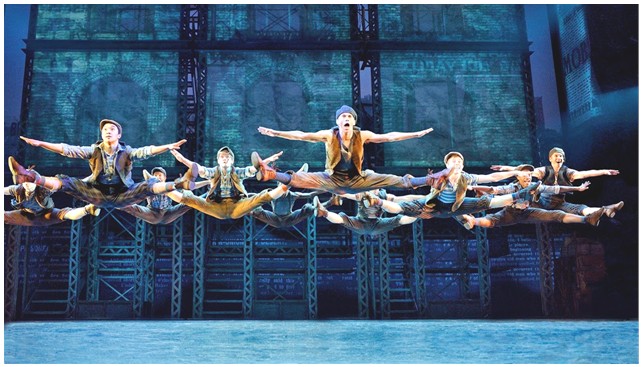 **** Highly Recommended **** I said it two years ago, and I’ll say it again now, “Newsies” is just spectacular.  “Newsies” has the most brilliant choreography I’ve seen in a long, long time.  First act production number, “Seize the Day”, is worth the price of admission!  Athletic, high energy, exciting – you’ll want to put “Newsies” on your must-see list.  “Newsies” gets 4 BIG Spotlights.

“Newsies” runs through August 7th at the Cadillac Palace Theatre, 151 W. Randolph, Chicago.  A performance schedule can be found at http://broadwayinchicago.com/show/disneys-newsies/.  Book early because many performances are sold out.  Running time: 2 hours, 15 minutes with an intermission.  Tickets range from $35-$100.  Parking is available at several garages near the theater.  FYI (800) 775-2000, all Ticketmaster retail locations and www.BroadwayInChicago.com.