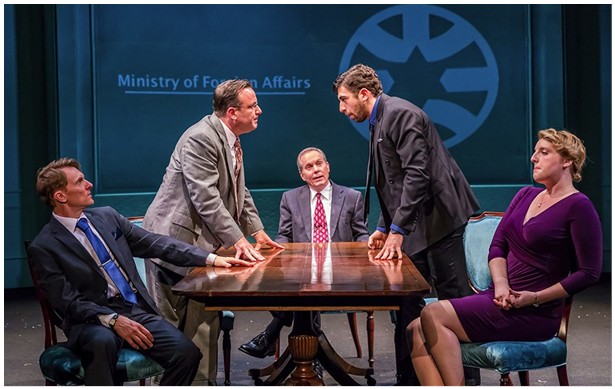 **** Highly Recommended **** The gripping political drama “Oslo” is definitely in my top five plays of the year.  In fact, the improbable and complicated story of a series of secret meetings between the Israelis and the Palestinians in Oslo makes for a brilliant play!  Who knew secret meetings between diplomats – the epitome of boring, at least in public – could become such an interesting play?  If a play starts to drag, I have a bad habit of zoning out for a few minutes.  Guess what?  I didn’t zone out because “Oslo” never drags!   Put this remarkable play on your Must-See list!  4 BIG Spotlights

By the way, while you’re waiting to be seated, check out the Oslo timelines on the pillars in the lobby.  If you have questions about the backstory of “Oslo”, there’s a handy insert in the program chock full of information about everyone involved.

Timeline Theatre production of “Oslo” runs through October 20th at Broadway in Chicago’s Broadway Playhouse, 175 E. Chestnut, Chicago.  Parking is available in the Watertower Place garage, $14 with theater discount (get a voucher card from an usher).