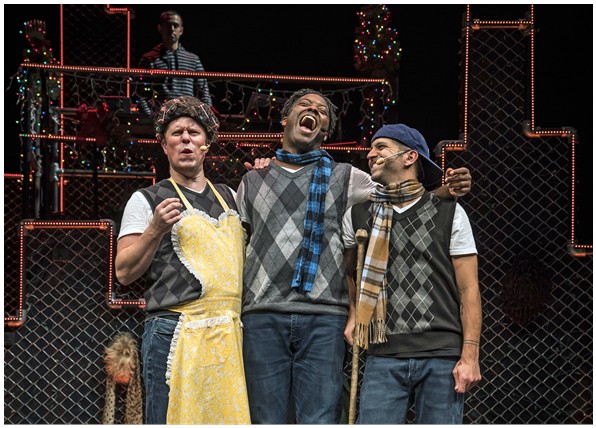 ***** Highly Recommended ***** Chicago Shakespeare Theatre’s newest venue, The Yard, is rocking with the return of” “Q Brothers Christmas Carol”. Please note: this is not “A Christmas Carol” as Dickens wrote it. The Q Brothers Collective (GQ, JQ, Jax and Pos) have yanked Ebenezer Scrooge and the gang into the 21st century! I’ve seen this original, cheeky, fun musical every year since it premiered in 2013 as a developmental work-in-progress (that’s 5 years!), and it still makes me laugh! It’s become my holiday tradition. 4 BIG Spotlights

For the first time – out of five – I didn’t see GQ playing Scrooge. John Hoogenakker is playing the original grump through December 9th. You might know Hoogenakker better from his role as Black Ops agent Matice in Amazon’s “Jack Ryan“. Jason Grimm will play Scrooge for the rest of the run, through December 30th.

This “ad-rap-tation” of the Dickens classic features clever, rhyming lyrics, the most up-to-date slang and texting terminology, and a completely different take on the characters. It’s really amazing how well the story holds up when it gets attitudinized. By donning different hats, scarves, aprons and some incredibly ugly wigs, JQ, Jax (Jackson Doran) and Pos (Postell Pringle), play all of the other characters.

Scrooge (Hoogenakker through December 9th), wearing a really bad grayish-white wig, is deeply in love with his cleverly marked money bag. When his long-suffering clerk, Bob Cratchit (Pos), tries to raise the thermostat, the miser stops him. A visit from a pair of Jewish do-gooders (JQ and Jax) is a good reason for a rant. A visit from his nephew, Fred (Jax), wearing a holiday-themed infinity scarf, bearing a gift and an invitation to dinner and charades, is the last straw.

After dodging traffic on his way home, Scrooge is visited by the ghost of his long-dead partner, Jacob Marley (JQ). Marley’s hell includes a new look – really bad dreadlocks – and an eternity of reggae music provided by a pair of Rastafarians (Jax and Pos). He warns Scrooge to expect three spirits.

Christmas Past (Pos) takes Scrooge back to the very tacky eighties to reacquaint him with a couple of hapless school friends (Jax & JQ) who are too nerdy for most girls. Then, on to his apprentice days at Fuzzy’s Wigs. While Dick Wilkins (Jax) and the Fuzzys sing “Get Fiscal”, Scrooge relives his first love – with Nell Fuzzy (JQ)!

Christmas Present (JQ), wearing a green jacket, sunglasses and a holly trimmed hat, takes Scrooge to see his nephew, Fred, and his partner Steve (Pos), who are obsessed with charades and speak in hashtags. Meanwhile, at the Cratchit house, Mrs. C. (Jax), wearing rollers and a hairnet, is fixing the Cratchit Christmas dinner, corn. As the Cratchit family sing about food, Lil’ Tim (JQ) ends each chorus with yet another strange malady – rabies, scurvy, pre-existing conditions, gout, and so on.

Talented DJ Kieran Pereira, who entertains both before and after the performance, spins everything from reggae to rock ballads with lots of hip-hop throughout the performance. By the way, you don’t need to understand (or even like) hip-hop music to love “A Q Brothers Christmas Carol”.

“A Q Brothers Christmas Carol” runs through December 30th in The Yard at Chicago Shakespeare Theatre on Navy Pier, Chicago. Parking is available at a 40% discount in the Navy Pier Garages with validation from CST.