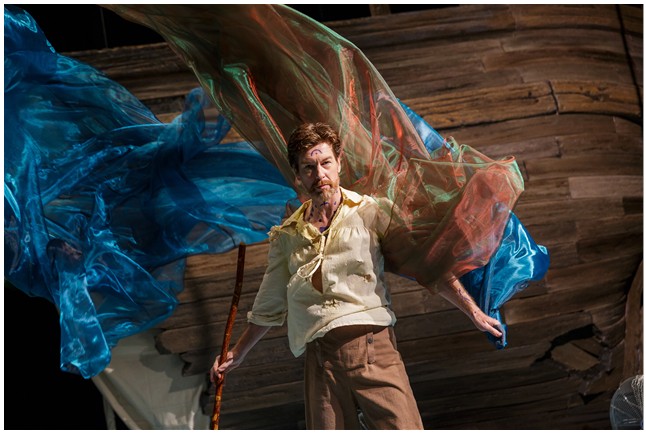 **** Highly Recommended   Chicago favorite, Nick Sandys, stars as Prospero in a whimsical, family-friendly production of “The Tempest” at the Notre Dame Shakespeare Festival.  Director West Hyler has melded music, magic, circus stunts and spectacular special effects to achieve his vision of “The Tempest”.  The professional cast which includes stars from the Chicago stage, Broadway, film, TV and the circus, is supplemented by younger actors from the NDSF Young Company.  My friend and I were charmed.  “The Tempest” gets 4 Spotlights.

“The Tempest” opens with a magical storm raging.  A ship, caught in the storm, wrecks, washing the passengers ashore on a magical island occupied by Prospero (Sandys) and his daughter, Miranda (Rebecca Leiner).

Fifteen years earlier, Prospero, who was the Duke of Milan, was betrayed by his brother Antonio (Brian Sprague), abetted by Alonso (John Herrera), the King of Naples and his brother, Sebastian (Guillermo Alonso).  Gonzalo (Alan Sader), who packed a trunk with a few necessities, was the only one to offer help before Prospero and his three-year-old daughter were set adrift in a boat.

When Prospero and his daughter ended up marooned on a magical island, Prospero used his own magic to enslave the island’s inhabitants, the magical spirit Ariel (Sarah Scanlon) and the monster, Caliban (Alex Podulke).

In front of a weathered hulk of a ship, Ariel sits on a trapeze playing a mournful clarinet.  Throughout the play, she does tricks that make the audience gasp.  Another sprite does silk aerials while Ariel’s Quality (Lois Abdelmalek, Catherine Bustos, Michael Cohen, Alys Dickerson, Candice Handy, Lydia Moss Sarah Razmann, Ryan Smetana, Jennifer Vosters, Maria Welser) play music.  Whenever Prospero orders Ariel to get something done, they scatter.

At Prospero’s order, Ariel separates the survivors from the shipwreck into different groups.  Ferdinand (Xavier Bleuel), son of the King of Naples, washes ashore alone.  Miranda, who has never seen another human, spots Ferdinand, and is fascinated.  On his side, Ferdinand seems pretty fascinated by Miranda, too.  Meanwhile, the quarrelsome Antonio and Sebastian annoy King Alonso, who is inconsolable over the loss of his son.

Alonso’s butler, Stephanie (Patrice Egleston) and another servant, Trinculo (Jacob D’Eustachio), who have found a cask full of liquor from the ship, are really enjoying their shipwreck.  By the way, in most productions, Alonso’s butler would be a man.  They share a flask or two with the monster, Caliban, who was drawn in by Trinculo’s juggling tricks.  In their drunken state, they believe Caliban’s tales of great wealth and agree to help him kill his enemy Prospero.

In the middle of a circle of electric fans – carefully arranged by Ferdinand who was carrying “logs” – Prospero uses his magic staff to set two huge pieces of colorful transparent fabric swirling above the stage, flying all the way up to the ceiling.

The NDSF Professional Company, the professional theatre in residence at the University, has been recruiting world-class directors and professional actors from across the country for their annual production since 2000.  The NDSF Young Company, comprised of students and recent graduates, presents a touring production performing at outdoor venues across northwest Indiana and southern Michigan.  Leiner (Miranda), Bleuel (Ferdinand) and Alonso (Sebastian) are members of the 2016 Young Company, as are all of Ariel’s Quality.