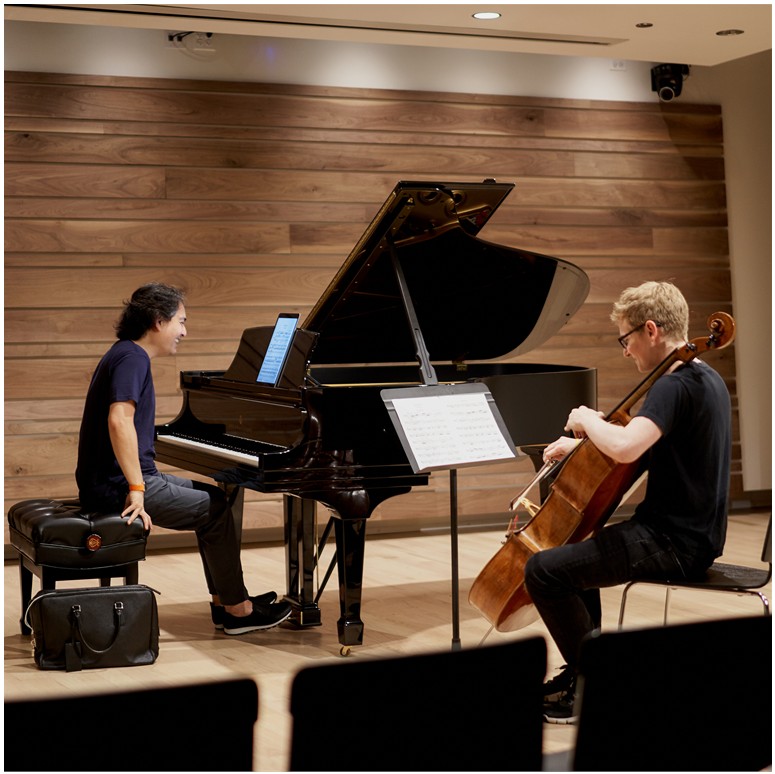 **** Highly Recommended **** When my friend Crista and I went to the second annual NEXUS Chamber Music Chicago Festival at a new Chicago venue, Guarneri Hall, I didn’t know what to expect. I knew that the musicians in NEXUS Chamber Music were all young and uber-talented, and I’d read that Guarneri Hall was designed specifically for chamber music, so I thought “Call of the Birds” would be a good concert but really, I had NO idea!!!! It was outstanding! My recommendation – hurry and get tickets for the last two concerts in the festival this weekend. 4 BIG Spotlights
“Call of the Birds” featured five pieces which might simulate birdsong, bird flight or any other bird behavior.
Franz Joseph Haydn’s String Quartet Op. 33 No. 3 “The Bird”, was played by Alexi Kenney, violin, Gabriela Lara, violin, Zoë Martin-Doike, viola, and Alexander Hersh, cello. A frothy, light, joyful piece, “Call of the Birds” had four movements with a similar motif winding throughout.
Toru Takemitsu’s “A Bird Came Down Walking” was a rather discordant piece featuring Zoë Martin-Doike on the viola and Victor Asuncion on the piano.
The sounds of Alexander Hersh (cello) and Victor Asuncion (piano) blended perfectly in Gabriel Fauré’s Romance for Cello and Piano.
Oliver Messiaen’s Theme and Variations for Violin and Piano provided Alexi Kenney (violin) and Victor Ascuncion (piano) to play off one another.
After a short intermission, Nexus – Brian Hong, violin, Gabriela Lara, violin, Zoë Martin-Doike, viola, Alexander Hersh, cello, and Victor Ascuncion piano – played the evening’s piece de resistance, Robert Schumann’s Piano Quintet in E-flat Major, Op. 44. I’ve listened to this piece many times, but I’ve never heard sound to equal this rendition! It was absolutely exquisite!

Tickets are $40 ($10 for students) for the Guarneri Hall concert. The Ganz Hall concert is free, although reservations are required Go to https://www.nexuschambermusic.com/events

By the way, NEXUS, a collective of highly acclaimed, uber-talented young musicians, was founded by Alexander Hirsch and Brian Hong. NEXUS is dedicated to finding new audiences for chamber music by eliminating the barriers between performers and audience. They are busy redefining the classical music concert-going experience by presenting first-class musical performances in conventional and unconventional venues throughout the world, which is streamed online.

First opened in 2018, Guarneri Hall was created as a unique Chicago venue specifically designed for chamber music performances. The 60-seat hall, located at 11 East Adams, 3rd floor, creates a perfect setting for live concerts, optimal for small ensembles, with an acoustically engineered space designed by Threshold Acoustics to enhance the sound of chamber ensembles, creating a one-of-a-kind listening experience for the audience.

Guarneri Hall is a new, 60-seat venue specifically designed for chamber music performance. Threshold Acoustics designed the acoustically engineered space to enhance the sound of chamber ensembles. Although spare in design, Guarneri Hall provides a listening experience second to none.

Rudolph Ganz Memorial Hall, has been called one of the true gems of Chicago architecture. It is a performance space enhanced with stained glass windows, gold-leaf arches, beautiful chandeliers and hand-painted murals. Ganz Hall received the Chicago Landmark Award for Preservation Excellence in 2003 and the American Institute of Architects Chicago Design Excellence Award in 2005.