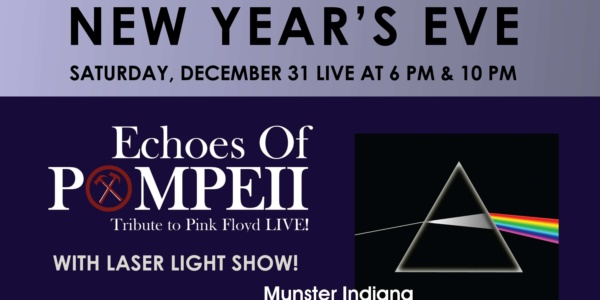 This event is one of the biggest New Year’s Eve events in the Northwest Indiana area.  It is a concert by the popular Pink Floyd tribute band Echoes of Pompeii, plus a laser light show, and there is a buffet dinner option.  There will be a countdown at Midnight as well.

Theatre at the Center’s celebrates New Year’s Eve and the arrival of 2017 with a live performance by the popular Pink Floyd tribute band Echoes of Pompeii which will include a magnificent laser light show experience. Rock group Pink Floyd was always known for presenting high intensity visual effects along with its powerful music and intriguing sound effects. This evening with Echoes of Pompeii will recreate that incredible concert experience. Echoes of Pompeii will perform many great songs from the band’s repertoire, made famous by the original artists. The laser light show and video special effects will make it a full-on sensory experience. For anyone who loves classic rock music, there is no better way to ring in the New Year.

“We wanted to kick it up a notch for New Year’s Eve, so we have added a more comprehensive laser light show than we have ever done before,” said Jeremy Andrews the group’s founder. “We want to give people the quintessential Pink Floyd concert experience that so many of us remember as being truly life-changing.”

Echoes of Pompeii is considered by many to be one of the best Pink Floyd tribute groups in the country. Based in Gary, Indiana, the 10-piece band thrills audiences with their sound and visual aesthetics, covering nearly 50 years of Pink Floyd music. The band incorporates video projections, sound effects and other Floyd-like elements to take audience members on a mysterious journey through the five decade career of one of rock’s most beloved groups. While Echoes of Pompeii honors the great music of Pink Floyd, they do not emulate the mannerisms and appearance of the band members. For them, it is all about the music.

There are two New Year’s Eve performances. The first is Saturday, December 31 at 6 p.m. and then there is a late night performance at 10 p.m. Tickets to the concert are $45.

The Center for Visual and Performing Arts also offers a New Year’s Eve buffet dinner before each of the shows. The buffet will open at 4:30 p.m. and again 8:30 p.m. The combination dinner and concert ticket is $75 per person.

Theatre at the Center is located at The Center for Visual and Performing Arts, 1040 Ridge Road, Munster, Indiana. To purchase individual tickets call the Box Office at 219-836-3255 or visit www.Tickets.com at 800-511-1552. Gift certificates are also available. Parking is free. For more information on Theatre at the Center, visit www.TheatreAtTheCenter.com