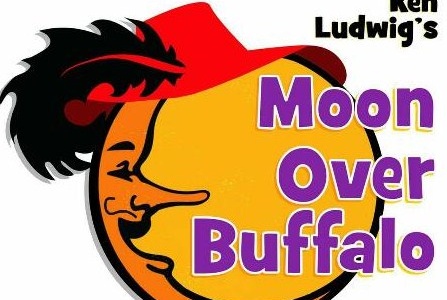 The Marian Theatre Guild’s spring offering is Ken Ludwig’s fast paced comedy  “Moon Over Buffalo” directed by Jayma Kay Emerson.
Last spring Jayma directed  Ludwig’s “Lend Me a Tenor,”  a similar comedy where there’s never  a boring moment with players entering and exiting at a quick pace.  When asked what she thought the similarities were Jayma laughed and said,  Well, there are lots of doors again!”
She added, “Ludwig just has such a high spirited, fun energy to his writing. He really keeps the action moving and there is never a dull moment.   Just when you think you have a chance to take a breath, in walks an dose of laughter.”
The play centers around George and Charlotte Hay, traveling actors, who are performing in Buffalo, New York.  They’re surrounded by other actors, a love sick lawyer  and a daughter who has left the theatre to be “normal.”
Featured in the cast are Matthew Kennedy, Kali Rasala, Susan Bobos, Elliot Bibat, Cassandra De La Rosa, Tony Vivacqua, Kevin Sherman and Madolyn Woodruff Hedin.
“The characters are a lot of fun, with a bit of quirky thrown in and it’s all very fast paced,” the director commented.
Performances are  April 16 and 23rd at 8:15 p.m. and April 17 and 24th at 3:00 p.m.  Saturday evening dinner/theatre packages are available and require reservations.  Box office opens April 4.  Call for information at 219-473-7555.