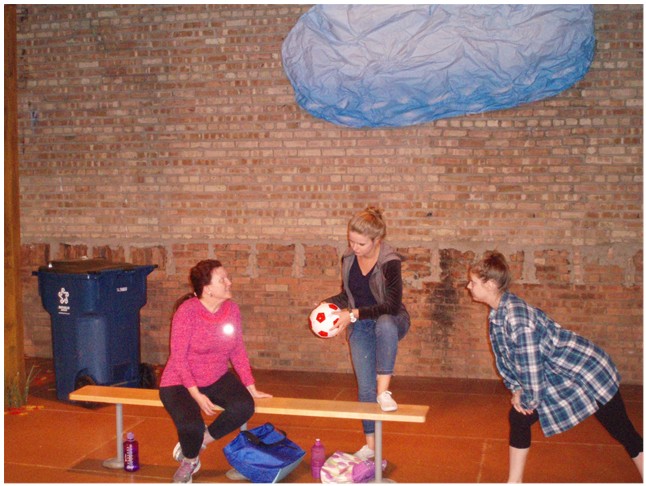 **** Recommended ****  The Towle Theater’s charming production of “Secrets of a Soccer Mom” really rang true to me.  The premise, a moms vs sons soccer game, seemed a little unlikely, but these women made it real.  I think any sports mom can remember having conversations just like these while standing on the sidelines.  I know I do – but maybe not quite so candid!  “Secrets of a Soccer Mom” gets 4 Spotlights.

Playwright Kathleen Clark’s script is predictably full of female angst but very entertaining nonetheless.  I think the hilarious zingers she drops in the midst of that angst makes “Secrets of a Soccer Mom” a keeper!  Comedic timing can be tricky, especially when trying to predict laughter.  Come in too soon and the audience loses the next line.  Come in too late and the action stalls.  Director John Buranosky, who’s been known to exercise his own brand of comedy on the Towle stage, has obviously shared his comedic chops with the cast.

So, there they are – three moms, on the sidelines, cheering for their eight-year-old sons while waiting to get in the game themselves.  They are casual acquaintances who would never have met if not for their children.

Alison (Alexandra Shields) is young, gorgeous, and uncertain how to behave on the sidelines.  Lynn (Stephanie Rohr), the prototype PTO mom, uses her time on the sidelines to troll for parent chaperones for an upcoming field trip.  Nancy (Suzanne Nyhan) is an older mom who isn’t sure she even belongs here.

Nancy brings it up first – encouraging the other mothers to let the boys win.  When the other moms ask why, she explains she’s not suggesting throwing the game, exactly, it’s just that the kids need a win.  The other moms agree, at least until they finally get in the game, when they start getting competitive.

Their conversations are regularly interrupted as they scream at their kids who are playing, at their other kids who are getting into whatever trouble they can find, at the coaches for not playing them, at the refs for bad calls.  They all ogle the good looking men, especially when one takes off his shirt.

Lynn is so organized she brings her PTO work with her to the field.  When there’s an inexplicable time-out, she turns a nearby garbage can into an impromptu desk.  When the discussion turns to sex, Lynn gets all dreamy-eyed over her active (3 or 4 times a week) sex life.  She has most of the best punch lines which Rohr delivers with a dash of snark.

Alison is trying to get Lynn to watch her kids for a week so she can go away to ‘find herself’.  When she spots the coach, she pulls her hair out of its pony tail and flips it over her shoulder.  Alison was an athlete in school but her husband, who is never home, is so critical he seems to want her to be somebody she’s not.  They have sex so infrequently; she’s amazed she got pregnant with her second.

Nancy feels so unloved and unwanted that she can’t imagine the other women would want to be friends with her.  She has some good ideas, but she’s constantly distracted by her son’s antics on the other side of the field – requiring regular screaming.

As they plot playing strategy, a fist bump seems logical.  What will they do if they actually win?  Eventually they figure it out.  With all their flaws, these moms are real people.  They love to complain about their kids, but it’s obvious they would do anything for them.  Even play in a moms vs kids soccer game!