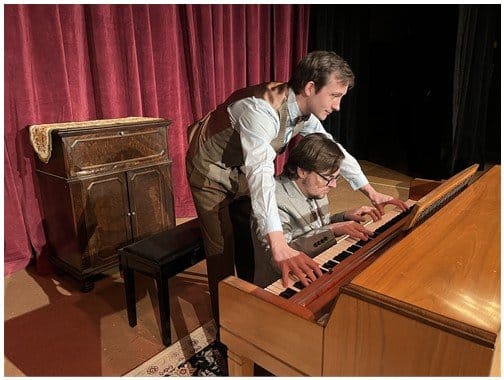 **** Highly Recommended **** The Towle Theater’s production of Murder for Two is fresh, fun and full of melodramatic moments (a lot like silent film). High energy, fast-paced dialogue and lyrics, plenty of zany suspects, campy, vampy characterizations, a spooky mansion, a silly twist and a pratfall or two make this whodunit so much fun. One or both of the stars play the piano throughout the show, sometimes playing at the same time – over, under and around each other! Murder for Two is a definite must-see. 4 Spotlights
Having seen the 2011 world premiere of Murder for Two at Chicago Shakespeare Theatre, I knew it would be necessary to find two talented actors who are more than proficient at the piano. I’m happy to say Alex Kulak and Emil Ginter fill that requirement perfectly!
Kevin Bellamy’s minimalist set keeps attention on the actors, not on the scenery. With just a few pieces of furniture – a chair, a table, a chaise and, of course, a piano – placed in front of a burgundy curtain with a pair of chandeliers hanging above, he’s created an elegant drawing room.
The family and friends of great American novelist, Arthur Whitney, are gathering for his surprise birthday party. Dimming the lights, they wait, hushing each other. Someone sings “Waiting in the Dark”. They see headlights but it’s just a latecomer. When the guest of honor finally arrives. people yell, “Surprise!”, and there’s a gunshot. When the lights come on, the guest of honor is a goner!
Officer Marcus Moscowicz (Alex Kulak) is sent to secure the scene until a detective can get there. In spite of the (unvoiced) admonishments of another cop called Lou, he is sure that this is his opportunity to earn his detective’s badge. Before he goes into the house to investigate, he sings a song called Protocol Says, to build his confidence before he examines the body, which is laying on the floor, surrounded by copies of his books.
The 12 guests/suspects are all played with panache by Emil Ginter, who can play the piano, do a rond de jambe and sing everything from soprano to bass. He often channels melodramatic moments in silent film, with a loud gasp and a freeze-frame pose.
Some of the suspects:
• Mrs. Dahlia Whitney, the victim’s wife, informs Officer Moscowicz that there is another, more important crime to investigate – someone stole the ice cream!
• Is there some nefarious reason that Dr. Griff, Moscowicz’ own psychiatrist, is at the party? Was he selling his patients’ stories to the victim for inclusion in his books?
• Murray and Barb Flandon can’t say a nice thing to/about each other, but they do mention that everyone at the party, including Moscowicz, is the subject of one of Whitney’s scurrilous books. But who is the subject of the next book?
• Although the wanna-be detective is infatuated with cigarette-smoking Ballerina, Barrette Lewis, she teases him, then ignores him. The burning question – did Mrs. W. know that the dancer was involved with Whitney?
• Steph Whitney, niece of the victim, is writing her dissertation about crime solving and totally wants to help detect! Could a romance be blooming?
• A twelve-member boys choir was hired to entertain at the party, but only three of the nine-year-olds, Timmy, Yonkers and Skid, are left. They keep everyone under surveillance for Moskowicz.
Note: Guests must show proof of vaccination with photo ID before entering the theater. Guests are required to wear masks while inside the building.
Murder for Two runs through March 13th at the Towle Theater, 5205 Hohman Avenue, Hammond. Performances are Fridays and Saturdays at 8:00 pm, Sundays at 2:00 pm. Parking is free in the lot behind the theater. Running time is 90 minutes, no intermission. Tickets are $21. FYI (219) 937-8780 or www.towletheater.org.
Read more of Carol Moore’s reviews at www.spotlightonlake.com