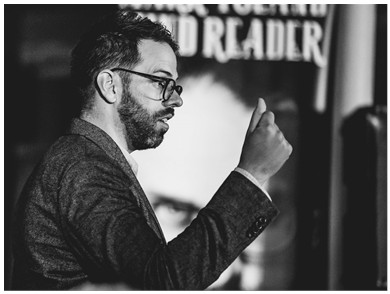 **** Highly Recommended **** I was absolutely Gobsmacked! Mark Toland “Mind Reader” is amazing. I have absolutely no idea how he did the things he did. I can guarantee you’ll be asking “How did he do that?” Hurry and order your tickets, you don’t want to miss “Mind Reader”! 4 BIG Spotlights

“Mind Reader” is not a magic show. Toland doesn’t use card tricks, sleight-of-hand or complicated illlusions. The stage is mostly empty, except for a pad of paper on an easel against one wall, a lectern in the center, and a black box sitting on a small table against the other wall. It’s just him and the audience – and a Mark Toland doll he tossed to different people in the audience.

Whoever caught the Mark Toland doll he tossed into the audience became part of the show. He asked some people questions, he asked others to come on stage. In a couple of cases, he’d written something on a piece of paper and sealed it in an envelope before the show. When the envelope was opened, everyone gasped!

While Toland asked everyone in the audience to tell their friends about the show, he also asked them not to talk about the specifics. That made it almost impossible to write a comprehensive review. Skeptic or believer, it didn’t seem to matter, we were all in awe!

Mark Toland “Mind Reader” appears on Wednesdays at 8:00 pm at the Greenhouse Theater Center, 2257 N. Lincoln Avenue, Chicago, with performances August 29th, September 5th, 12th, 19th, October 3rd, 10th, 24th and 31st. The show runs 75-80 minutes, no intermission. Tickets are $25. Parking is available in the Lincoln Commons Garage (formerly Children’s Memorial Hospital Garage) about a block and a half north of the Greenhouse. 2-4 hours will run you around $10. Metered street parking can also be found, especially on week nights. FYI (773) 404-7336 or www.greenhousetheater.org.