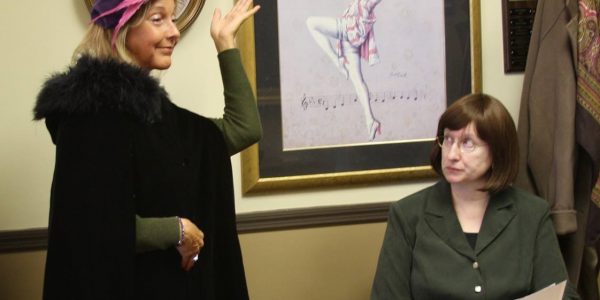 Enlarge and enliven your sense of adventure with Footlight Theatre’s next production, “Lettice and Lovage,” running two weekends on March 31, April 1-2 and 6-9 at Footlight Players in Michgian City, Indiana.

Lettice Duffet (Kali Rasala), an expert on Elizabethan cuisine and medieval weaponry, is an indefatigable but daffy enthusiast of history and the theatre. As a tour guide at Fustian House, one of the least stately of London’s stately homes, she theatrically embellishes its historical past, ultimately coming up on the radar of Lotte Schon (Christine Long), an inspector from the Preservation Trust. Neither impressed or entertained by Lettice’s freewheeling history lessons, Schon fires her. Not one however, to go without a fight, Lettice engages the stoic, conventionial Lotte in battle to the death of all that is sacred to the Empire and the crown.

Both of these award-winning leading ladies are renowned for their acting prowess and have starred in several plays across the region. Rasala was last seen at Footlight as Amanda Wingfield in “The Glass Menagerie,” and Long last took the stage as Lucille in “The Cemetery Club.” The show also features performances from George Maslankowski, Steve Rohe, Shannon Wilhelm, Joy Davidson, Laura Sullivan and Emma and Joe Blanchard.

This hit by Peter Shaffer, the author of “Equus” and “Amadeus,” featured a triumphant award-winning performance by Dame Maggie Smith in London and on Broadway.

“’Lettice and Lovage’ explores how two main characters adapt to life and the changes that occur in their lives.  Do we choose to reject the past and bemoan the “awful” present, do we merely accept the way things are, or do we work at changing them?” Beck said. “I think, given our political climate, this will resonate with some audience members.

Beck has directed more than 20 plays in Chicago and across the region, most recently “The Glass Menagerie” and “I Hate Hamlet” at Footlight; “Miss Julie” at 4th Street Theatre in Chesterton, and “A Winnie-The-Pooh Christmas Tail” at Chicago Street Theatre in Valparaiso. He is looking forward to directing “You Can’t Take It With You” at Valparaiso’s Memorial Opera House in September.

Show dates are March 31, April 1-2 and 6-9. Tickets are $12 for adults or 2 for $20 with a coupon that can be printed from the Footlight website at footlightplayers.org. Tickets for children 12 and younger, and Thursday shows, are always $10.

Curtain is at 7:30 pm Thursdays through Saturdays and 2 pm Sundays. Doors open 45 minutes prior to curtain.

Reservations will be held until 15 minutes prior to curtain unless secured by the presentation of a Footlight Season Gift Card or by prior payment in full. Reservations are recommended and may be made by calling 219-874-4035 or at www.footlightplayers.org. A 2-for-1 coupon is available for opening night on the website.

Footlight Theatre is located at 1705 Franklin St. in Michigan City.