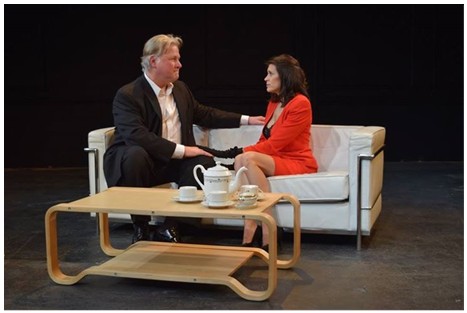 Chicago Street Theatre has a reputation for choosing interesting and unusual plays.  Their newest production, “Orson’s Challenge”, a play I’d never seen, intrigued me.  Since it’s about Orson Welles and Lawrence Olivier, it could have been fascinating.  Watching larger-than-life characters trading insults can be so much fun!  Instead of fun, the audience got performances that were so understated they were almost boring.  I give “Orson’s Challenge” 2 ½ Spotlights.

I don’t often give community theater people bad reviews, since they volunteer their time.  CST is usually a venue where people do excellent work.  “Orson’s Shadow” is not their best work.  Although the actors were all obviously well-rehearsed, the way they played their characters was way too low-key and unemotional.  These people were larger than life, volatile, emotional, insecure, serial cheaters who lived to make scenes.  If there was anyone in the room, that was an audience!

The story is narrated by a critic, Kenneth Tynan (Dustin Ritchea), whose good friend, Orson Welles (George Maslankowski) is trying to put together financing for a new movie he’s written called “Chimes at Midnight”.  Meanwhile, he’s going to direct a production of Ionesco’s “Rhinoceros” in London’s West End.

Welles worked with Sean (Marc J. Bonich) in a theater in Dublin, so he’s hired him to work with him in London.  After he convinced Lawrence Olivier (Daniel Matern) to star in the play, Olivier demanded that Joan Plowright (Caity Mullen) be his co-star.  He’s just started an affair with her, even though he was still married to Vivian Leigh (Mary Walton DeBoer), who’d recently had a breakdown.