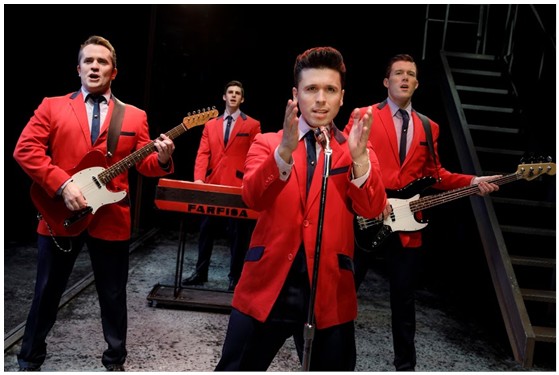 **** Highly Recommended **** I don’t know that I can say anything about “Jersey Boys” that hasn’t already been said by multiple reviewers!  If you’re a rock ‘n roll aficionado, this is the perfect show for you.  Sit back and enjoy as the talented cast performs hit after hit after hit.  I was lucky enough to see Frankie Valli and the Four Seasons more than once in my life, and this music was right on!  “Jersey Boys” rocks!  4 BIG Spotlights.

I have to say that I don’t understand why the show opens with a totally incongruous scene of a hip hop singer and dancers performing.  Finally, four microphones roll forward and the music segues into rock and roll.

“Jersey Boys” is the ultimate jukebox musical and the mostly true story of four boys from New Jersey who became rock and roll royalty.  During the fifties, the music industry wasn’t sure where it was going.  Although the vets thought the big bands were great, the younger set thought they were boring.  People were experimenting with different sounds – doo wop, rhythm and blues, folk, and rock and roll.

In the fifties, Tommy DeVito (Cory Greenan), his brother Nick (Todd DuBail) and Nick Massi (Jonathan Cable) were knocking around New Jersey playing any gig they could get – in between prison stints.  Then, two things happened, brother Nick got a longer prison sentence, and Tommy spotted a teen-aged boy with a huge voice.  Although the trio continued to play any gig they could get, they still didn’t have a name.

Just when Valli, DeVito and Massi were ready to quit, they got a gig in the lounge at the Four Seasons bowling alley, and suddenly they had a name.  Soon after, Bob Gaudio (Eric Chambliss), a songwriting one-hit-wonder (he wrote “Short Shorts” as a teenager), joined the group.

Bob Crew (Wade Dooley) gave them work as studio musicians and backup singers for a couple of years.  Meanwhile, Bob Gaudio and Frankie Valli made a handshake agreement that each would own half of the group.  When Gaudio wrote a catchy new song for the Four Seasons, Bob Crew finally agreed to record it.  Interestingly enough, Vee-Jay Records, from Gary, was the first label to sign the Four Season.

Having grown up in the sixties, I remember the music – in fact, I play it still.  I can chart the events of my youth by the Four Seasons hits.  If we liked a song, we’d quote the kids on American Bandstand and say, “It has a good beat and you can dance to it.”  The Four Seasons’ first hit, “Sherry”, fit the criteria.  Incidentally, I have a cousin named Sherry – and since I hated my name and loved hers – “Sherry” became kind of an anthem for me.  I’d just broken up with a boyfriend when “Big Girls Don’t Cry” came out, and so on.  “Walk Like a Man”, “Dawn (Go Away)”, “Rag Doll” and “Can’t Take My Eyes Off You” are all personal favorites.

“Jersey Boys” runs through April 7th at the Auditorium Theatre of Roosevelt University, 50 Ida B. Wells Drive, Chicago.  The best parking option I’ve found is Loop Auto Parks, 524 S Wabash (under the El) at $20; $16 with coupon available at www.auditoriumtheatre.org/plan-your-visit/parking-and-directions/.