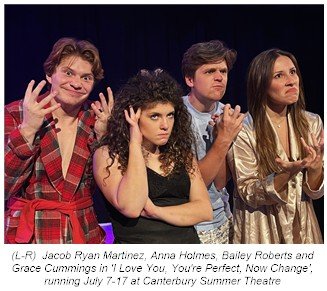 The Canterbury Summer Theatre production of “I Love You, You’re Perfect, Now Change!” is a terrific musical for these hot summer days/nights. It’s funny, light, fast-moving, and just plain fun – and it has good music. The original script is definitely outdated, but some judicious tweaking brought it into the age of social media. I give “I Love You, You’re Perfect, Now Change” 3½ Spotlights.
“8-Track: The Sounds of the 70s” was a showcase for the talent, energy and enthusiasm of the 2021 cast who sang and danced their way through the 70s. “I Love You” adds comedy to the mix for Anna Holmes, Grace Cummings, Jacob Ryan Martinez and Bailey Roberts.
“I Love You, You’re Perfect, Now Change” is a series of vignettes about relationships, beginning with “Cantata for a First Date” intoned by four monks/choir members/angels – take your pick. The Cantata is reprised three times over the course of the show. An ever-changing billboard projected above the stage names the vignettes.
The first act is about meeting/dating the opposite sex, culminating in a wedding and all the nervous doubts that entails. My particular favorites – “A Stud and a Babe” and “Men Who Talk and the Women Who Pretend They’re Listening”.
Starting out with the rather hilarious “Always a Bridesmaid”, the second act is devoted to the foibles and frustrations of marriage. In one of my favorites – “The Marriage Tango” – a couple are gleeful because they’re “gonna have sex!” Another favorite, “Funerals Are for Dating” had me laughing out loud.
“I Love You, You’re Perfect, Now Change” runs through July 17th at Canterbury Summer Theatre, 807 Franklin Street, Michigan City. Running time is approximately two hours, 15 minutes, with an intermission. Next up at Canterbury, “Ordinary Days”, running July 21st through 31st. Performances are Wednesdays and Thursdays at 2:00 pm, Fridays at 7:30 pm; and Saturdays at 6:30 pm. Tickets are $17 with discounts for seniors and students. FYI (219) 874-4269, www.canterburytheatre.org.