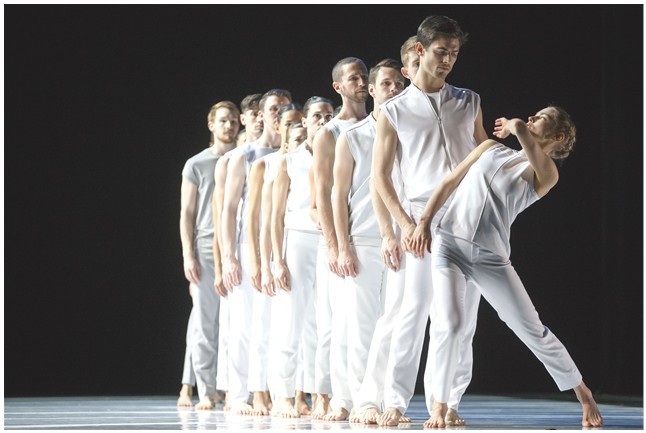 I’d never been to a performance of Hubbard Street Dance Chicago, although I’d always heard they were an uber-talented company.  I was delighted to attend the opening of their Fall Series at the Harris Theater for Music and Dance.  The three-part program (with two intermissions) featured pieces choreographed by Jiří Kylián, Brian Brooks and Alejandro Cerrudo.  I was in awe of the grace and strength displayed by the entire ensemble.  4 Spotlights!

The program began with two of Jiří Kylián’s six black and white works, “Falling Angels” and “Sarabande”.  My friend Karen, a Hubbard Street enthusiast, told me a bit about Kylián’s work before the performance.

“Falling Angels” featured the eight female members of the company coming together and moving apart in a series of inventive patterns to a composition by Steven Reich called “Drumming: Part 1”.  I loved the dance, but honestly, I got really tired of the drums after a while.

Six male dancers (Jeffery Duffy, Michael Gross, Jason Hortin, Andrew Murdock, David Schultz and Kevin J. Shannon on Nov. 17 & 19; Jesse Bechard, Elliott Hammans, and Florian Lochner replace Murdock, Schultz and Shannon on Nov. 18 & 20) dance  “Sarabande” to Bach’s second partita for solo violin with “electronically manipulated sound made live by the dancers’ bodies”.  It was actually hard to tell whether their movements were making sounds or if they were making vocal sounds imitating their movements.  I was mesmerized by their masculine grace and strength.

Brian Brooks is the first resident choreographer at the Harris Theater, which means he had the opportunity to work closely with resident company, Hubbard Street Dance.  “Terrain” is the first work resulting from this collaboration performed to Terry Riley’s “In C” electronically re-composed by Todd Reynolds.

Linear is the best word I can find to describe “Terrain”.  The dancers, wearing white or gray tunics and pants, frequently formed a long straight line which would undulate, break and fold in on itself.  Smaller groups of dancers (one, two or three most often) would perform a series of movements, then one or two might pick up another and carry him/her off, and a line would start to form again and again.

“Niebla” is the 15th original work Alejandro Cerrudo, Hubbard Street’s Choreographer in Residence has created for the company.  Using solo piano pieces by Johann Sebastian Bach, Franz Liszt and Franz Schubert, Cerrudo has created graceful movements which encourages the audience to “…really hear and feel the music; that the dance brings its own complexities and nuances to the experience.”  “Niebla” was my absolute favorite of the three works.

Although the FALL SERIES has concluded, the Hubbard Street Dance Chicago season will continue in 2017 with the SPRING SERIES March 16th through 19th, DANC(E)VOLVE: NEW WORKS FESTIVAL May 10th through 14th and the SUMMER SERIES June 8th through 11th.  Hubbard Street Dance is a resident company at the Harris Theater for Music and Dance in Millennium Park, 205 East Randolph, Chicago.  By the way, parking is available at a reduced rate.  Get your ticket validated in the lobby.  FYI www.hubbardstreetdance.com.